A New Kind of Map Where Norway is Next to Peru

But economist Mark Perry took a better route. By giving country names to states with a similar nominal GDP, he lets us see that California’s output is close to the value of Brazil’s and Illinois is comparable to Saudi Arabia. Viewed as 50 states that equal 50 countries…amazing! 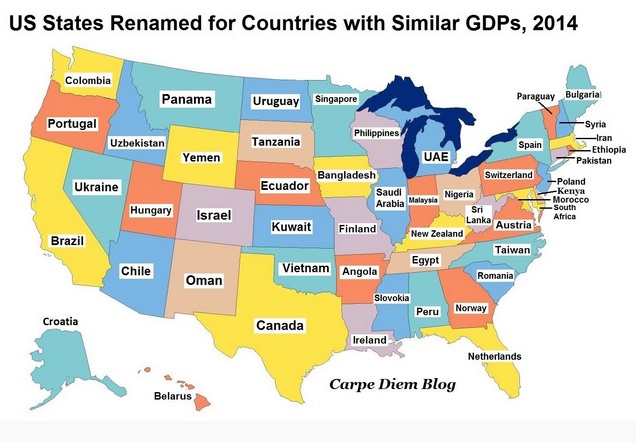 In case your geography is rusty, here is a real U.S. map:

We can slightly tweak our perspective by giving the U.S. states a world GDP rank. Into Brazil’s #7 slot we could place California, Texas would move into Canada’s #11 position and New York would replace Spain in #14.

Our Bottom Line: The U.S. GDP

We could debate whether nominal GDP is a good yardstick since it ignores purchasing power. But still, compared to all countries except for China, the U.S. economy is disproportionally huge.

Where to Spend 100 Trillion (Zimbabwe) Dollars

The Significance of Potty Parity