Why Should Tesla Stay in New Jersey?

At my local New Jersey shopping mall, there is a Tesla store… I think.

During the 1920s, the auto industry and local governments agreed that the way to sell a car was through a network of local dealers. As a result, most states restrict or prohibit direct sales from car makers to car buyers. Because the Tesla store at the Short Hills Mall is run by Tesla, it violates NJ law.

These are the states that restricted Tesla sales as of March 28: 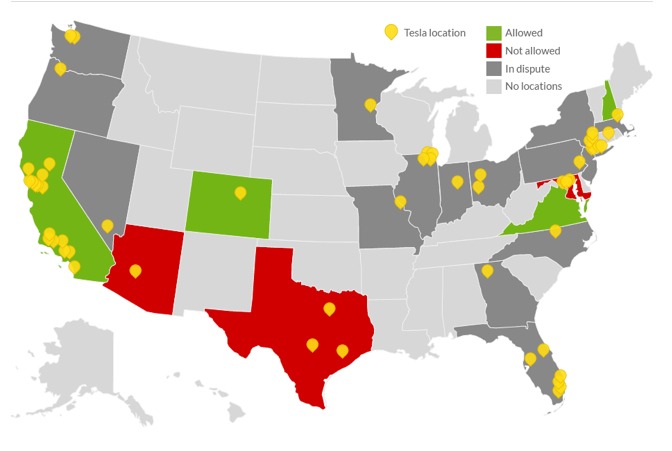 Defending the dealer network concept, the president of the New Jersey Coalition of Auto Retailers said, “The franchise system that’s followed by every other automaker in the marketplace gives the consumers several choices. They can buy from any one of a number of competing dealers, and that drives competition.”

By contrast, according to a Yale economics professor, “There isn’t a rational argument for why a new company should have to use dealers. It’s just dealers trying to protect their profits.” And Tesla has added, “”This is an affront to the very concept of a free market.”

Agreeing, many economists would explain that Tesla faces the same type of supply restrictions as occupations that require licensing.

In Texas, a salon shampooer needs 150 hours of classes while, until 2012, for a Utah hair braider, 2000 hours of cosmetology school was the rule. Similarly, a locksmith in Oklahoma has to pay a fee, take a test, and undergo a background check. The barrier for Tesla is the separate dealership it would need to find.

Even when the costs outweigh the benefits, licensing types of requirements can it can be tough to eliminate. The problem is that the relatively small group that benefits from licensing can be quite vocal when challenged. By contrast, lacking one voice, millions of consumers have little impact. We could say that we have concentrated benefits and diffuse costs.

So, if Tesla prefers a retail model like Apple’s rather than Ford’s, how can New Jersey refuse?

Sources and Resources: H/T to New Yorker writer James Surowiecki for his always excellent “Financial Page” and discussion of New Jersey’s prohibitions for Tesla in the April 21, 2014 issue. Complementing Surowiecki, CNN had the above map, NPR had a more recent discussion and in the past, econlife has looked at licensing.

How To Cope With (Water) Stress