How Our Tweets Reflect Our Happiness

What we tweet about can reveal how we feel.

Knowing that tweets count, we can consider what they say about measuring happiness.

We can see a record of our national happiness at the University of Vermont’s Computational Story Lab. The lab’s founders, mathematicians Peter Dodds and Chris Danforth, and their associates, ranked a list of 10,000 words. Using a 1 to 9 scale, they wound up with “laughter” as #1 and “terrorist” as 10,221. From there, everyday for more than a decade, they’ve been gathering a random 10 percent of 500 million messages–maybe 200 million words–on Twitter. (The numbers have changed since they started. During the pandemic, Twitter’s average daily average user count spiked 34 percent.)

These are our happiest words: 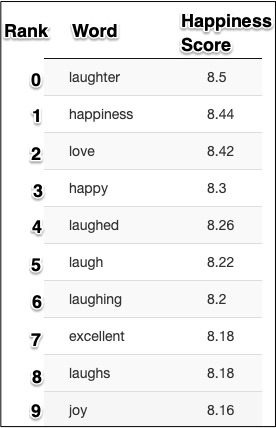 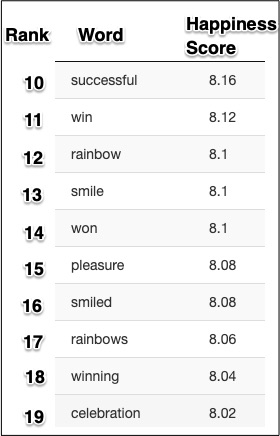 At these are the sad ones: 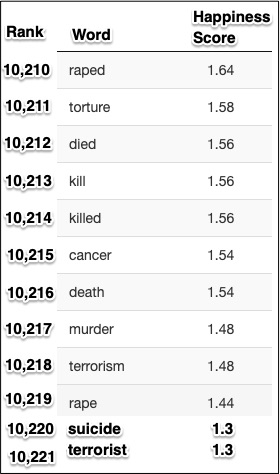 Keeping track of happy and sad words in tweets, the Lab created its Hedonometer. Below, the last dot shows an increase in happiness on Saturday, November 8, when the presidency of Joseph Biden was projected. While the dot was up, it had a combination of strong negative and positive words: 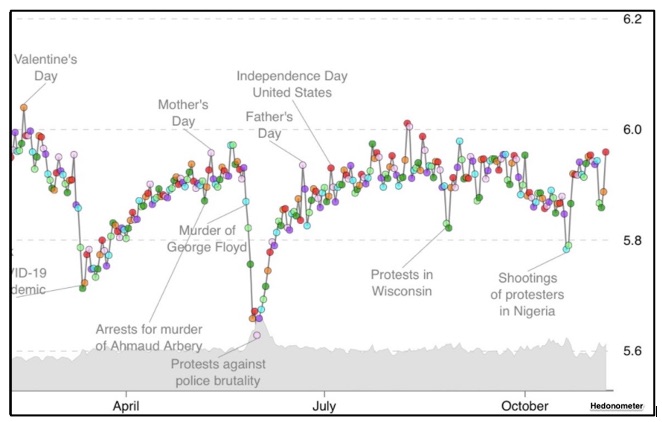 The Lab concluded that 2015 was a happy year. More recently, we have been trending sad: 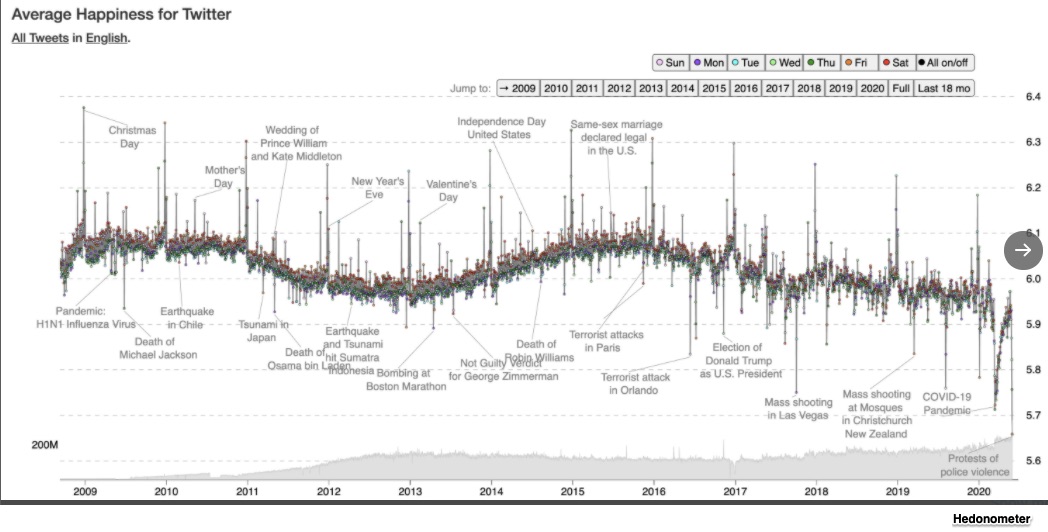 Today, the GDP is our bottom line because questions about its validity involve happiness. By monitoring the dollar value of the goods and services we produce annually, it is supposed to tell us how we are doing.

But the people who remind us that we “treasure what we measure” say the GDP insufficiently covers what really matters. One of those people is Nobel Laureate Joseph Stiglitz who says, “If we measure the wrong thing, we will do the wrong thing,” Building from there he suggests subjective metrics that are tougher to quantify. They include sustainability, inequality, and …

…perhaps the hedonometer that is shown in our featured image from the Computational Story Lab.

My sources and more: During yesterday’s walk, trying briefly to escape the real news, I went to Gimlet’s Reply All and learned about a Happiness Calculator. (I guess I didn’t really depart from current events because the meter said we are living through a sad era.) From there. the NY Times had more in a new article, from 2015, and the Lab described the Hedonometer. And finally, for a GDP connection, the OECD had the Stiglitz recommendations..

The Cold Chain Links for a COVID-19 Vaccine

November 2020 Friday's e-links: From an Outside Podcast to a Squeaker