This is Lucky. She is the Schwartz family pandemic puppy (actually my daughter’s). A Jack Russell and Chihuahua combination, she is a rescue dog. 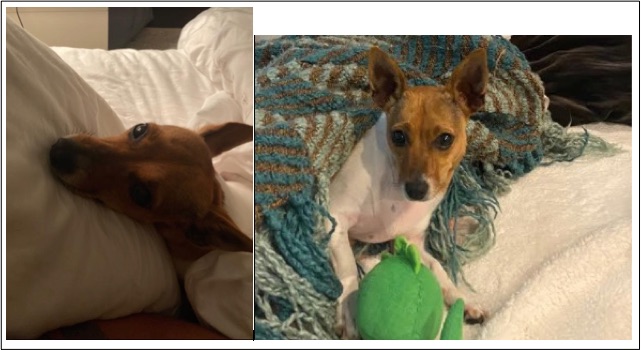 One new owner said she gets the “puppy dosage of happiness.” There is also an economic side.

Because of the pandemic, doggy demand is way up. Parents need something for their kids to do and want more love for themselves. Shelters said that people were doing them a favor, taking dogs temporarily, when they had to shutdown. But temporary became permanent as families wanted to keep their new friends. The only numbers that have dropped are from U.S.shelters with fewer strays. In Los Angeles, the ASPCA reported double their normal rate of animal adoptions.

As you might expect, puppy businesses are seeing prices soar. In Great Britain, the Cockapoo (cocker spaniel and poodle) has topped a list of increasingly pricey pooches: 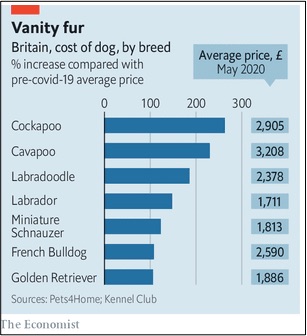 The BBC tells us that during September, on average, the price of popular breeds more than doubled. Between March and September, the average 2020 doggy price was £1883 while for 2019, £888. 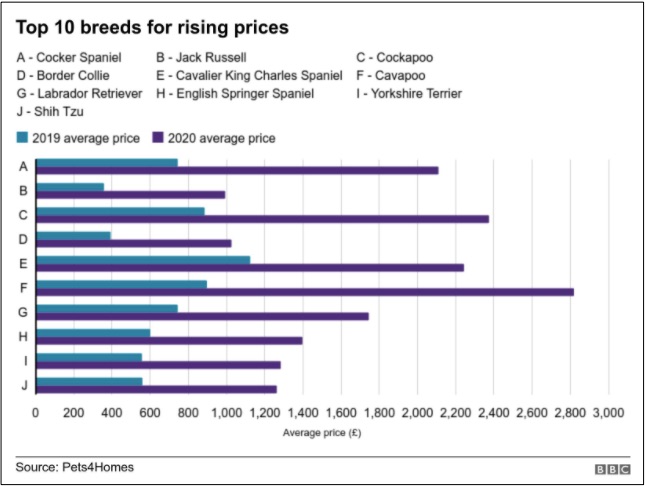 We would expect that dog trainers are doing more virtual classes, at home visits, and boarding packages. One boarding trainer said he is booked until January 2021.

But also, flight nannies (yes, nannies) have more trips. As the people who do long distance dog deliveries, flight nannies do doggy transport. One bernedoodle (the product of an 85-pound bernese mountain dog and a 13-pound miniature poodle) was flown from Colorado to Boston. The dog cost $3950 and the trip, $450 plus the air fare. During one month, a flight nanny had a Boston trip, six deliveries in California, six to New York and one each to Phoenix and Seattle.

One veterinarian said she is seeing a 15 percent boost in new pets. COVID-related curbside drop-off and pickup have become normal as pet owners want their vaccinations and wellness visits. One group that tracks financial data for 2,800 clinics said July 2020 revenue was up 18 percent from a year earlier. Animal emergency rooms are also much busier.

An economist would say that it all adds up to an increase in demand. With demand defined as an entire schedule of price quantity pairs, an increase means the entire curve shifts to the right. One source of that shift is complementary goods and services. A good example is peanut butter and jelly. When peanut butter becomes more popular, we want more jelly too.

Below, I’ve shown how a change in pandemic puppy demand leads to a demand shift for trainers (or boarders, or vets, or flight nannies): 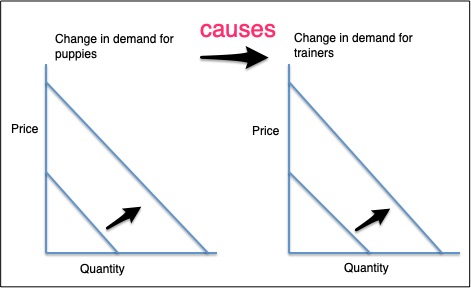 My sources and more: There were countless ways to find out about puppies during the pandemic. I started with the BBC. From there, The Washington Post, The Economist, Cleveland.com, and the NY Times took me from one profession to the next. And then finally, The New York Post confirmed that U.S. doggy prices were up.

Please note that I have used puppy, pooch, and doggy interchangeably since my statistics did not always distinguish among them. However, still, they conveyed today’s big idea about dog demand. Also, after publication, I corrected Cockapoo to indicate the breed is a Cocker Spaniel Poodle combo.

Why Buying Plum Jam Is Like Retaking the SAT

Looking at Our Restaurant Anxiety