Our quest to diminish emissions got a boost from the pandemic…temporarily.

Because of the coronavirus crisis it is entirely possible that, in 2020, global emissions will sink to where they were a decade ago. But once our economic activity picks up, so too will our emissions. The total impact could be just a drop of less than one five-hundredth of a degree Fahrenheit by 2100.

It won’t be easy to reduce the revitalized emissions surge. One problem is how we respond to our carbon friendly behavior.

Researchers checked the response in Norway to carbon friendly choices and found that afterwards people used their savings for carbon-intensive activities. As a result, they sacrificed close to 59 percent of the impact of their virtuous behavior.

Below are some examples from a U.K. study of the spending that followed reduced vehicle use. The quintiles refer to income groups: 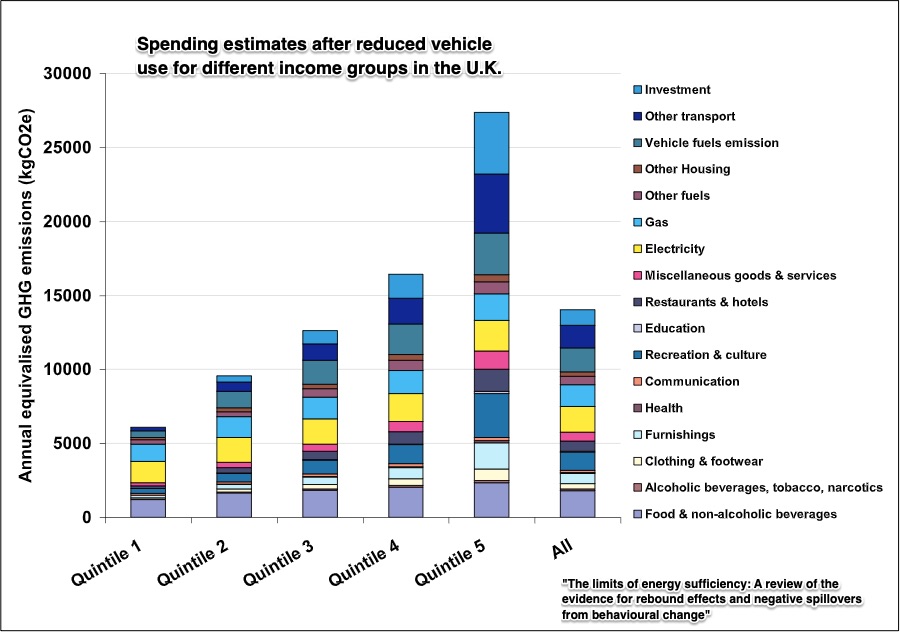 Our Bottom Line: The Rebound Effect

In The Coal Question (1865), William Jevons identified a rebound effect that resulted from the energy efficiency created by the steam engine. Whereas efficiency could have created less energy use, instead it preceded a rebound. More efficiency fed the incentive to use more energy rather than less. Jevons said, “It is wholly a confusion of ideas to suppose that the economical use of fuel is equivalent to a diminished consumption. The very contrary is truth.”

Well-meaning consumers also unknowingly demonstrate the rebound effect. They were reducing CO2 emissions by using a vehicle less. But then, subsequent spending decisions that ranged from food to clothing and other transport offset what they initially achieved. When researchers compared lowering temperatures, less vehicle use, and diminished food waste, they concluded that food waste efforts had the largest rebound and lowering temperatures the least. Vehicle use was in between.

Where does all of this leave us? We can say that total emissions reduction is tough to incentivize because of the rebound effect.

My sources and more: I was delighted to discover an opinion column from (always interesting) Bjorn Lomborg in The Wall Street Journal.  His examples of the rebound effect took me to this paper.

Who Should Pay the Rent During the Pandemic?

What a Tip Tells Us