At home and at work, many women have experienced more of a burden from the pandemic.

Researchers in England collected coronavirus lockdown data from 3,591 two-parent opposite gender households between April 29 and May 15. Looking at paid work, they concluded that mothers took a greater hit than fathers. Correspondingly, women were more occupied with childcare than their male partners.

You can see below how the mothers and fathers allocated their time among childcare, housework, and paid work when they and their children were locked down at home: 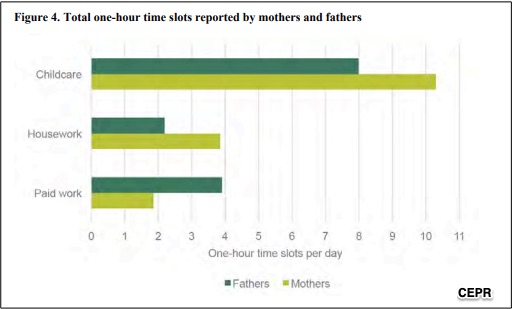 At work also, as healthcare providers, women were playing a major role.

The following data for physicians is from 91 countries and for nurses,  61 countries. In Europe and the Americas, the gender divide is almost equal. But in regions with more developing economies, male physicians are by far the majority. However, the nursing profession is dominated by women:

With women occupying many healthcare positions, it follows that female healthcare workers suffered from the majority of infections in Spain, Italy, and the U.S.: 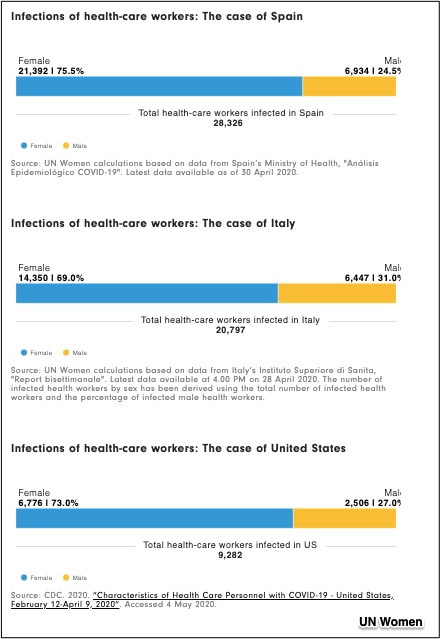 At college, health profession majors have been dominated by women since 1971. Displaying the female share of Bachelor’s Degrees by field from 1971 to 2018, economist Mark Perry shows us that health remained consistently at the top. I’ve just copied 1971 and 2018. But do look at his animation. (I was delighted to see that business majors were increasingly female. In 1971, they were at the bottom of the graphic.): 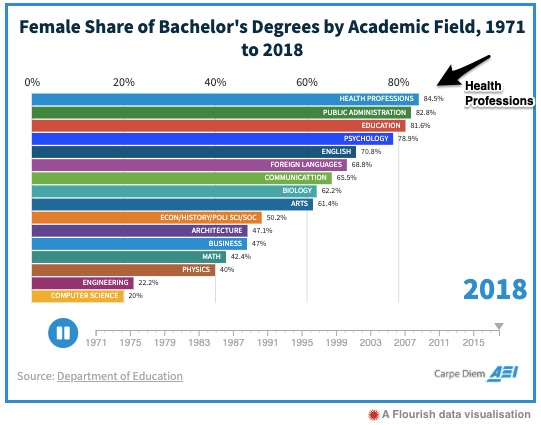 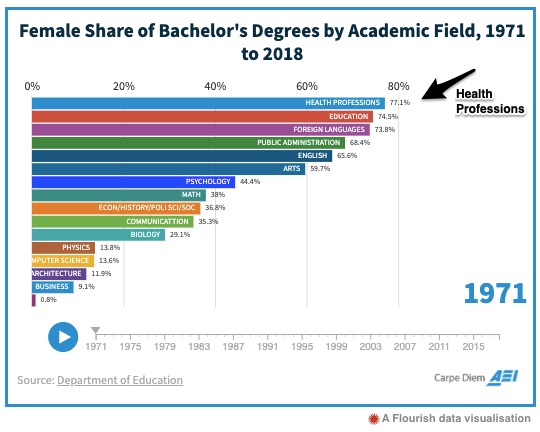 So, where are we? As economists, we can return to human capital. Just like physical capital includes the machines that populate our factories, human capital refers to the knowledge with which we equip ourselves. In the health professions, and as home caregivers, women are more likely to have the human capital. Consequently, more women seem to have felt the burden of the pandemic than their male counterparts.

My sources and more: It is always a pleasure to span the liberal conservative spectrum when I search for data, analysis, and opinion. For women’s work, I started with the AEI Blog, Carpe Diem. But CEPR was next and then WEForum. and WHO.

July 2020 Friday's e-links: From a van Gogh and a Felon to the First Man on the Moon