Why McDonald’s Likes the Drive-Thru

In Houston, Raising Cane’s Chicken fingers had 45 cars snaking around the block.

McDonald’s also said their drive-thru was a life saver.

Yesterday, during a Q2 2020 earnings call, McDonald’s CEO referred to their drive-thru more than 30 times. His goal was to let investors know that it had vastly increased pandemic revenue, served more customers than their competitors, and become a springboard for reopening restaurants.

It all depends though on where you look. In Australia, Canada, France, Germany, and the U.K., 70 percent of McDonald’s restaurants have a drive-thru. Pre-Covid they were responsible for one third of all sales; now it’s two-thirds. Meanwhile, at 15 percent, the drive-thru is rather sparse in China as is its Latin American presence.

As for the U.S., the McDonald’s drive-thru is almost everywhere. At 95 percent of their restaurants, it has generated close to 90 percent of their Q2 2020 sales. During 2019, McDonald’s began using software that let them tweak drive-thru menus based on trending items, traffic, and weather. They also experimented with voice recognition.

The goal was speed and it seemed to be working. We can expect a McDonald’s start to finish drive-thru visit that lasts 253 seconds. But having just heard McDonald’s CEO say this year’s times were down by 15 to 20 seconds, I wonder if they pulled ahead of Burger King and Wendy’s: 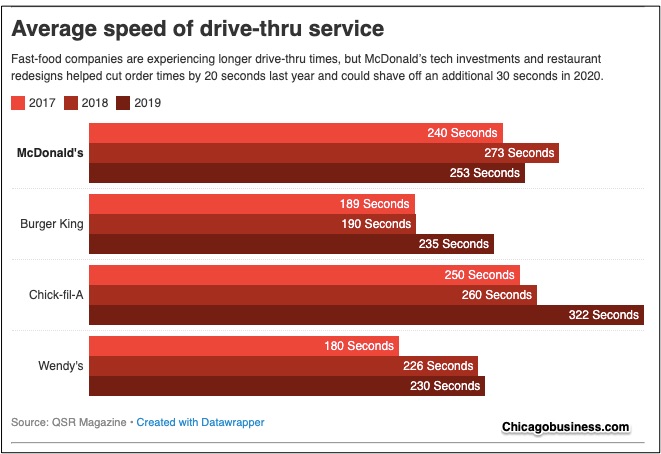 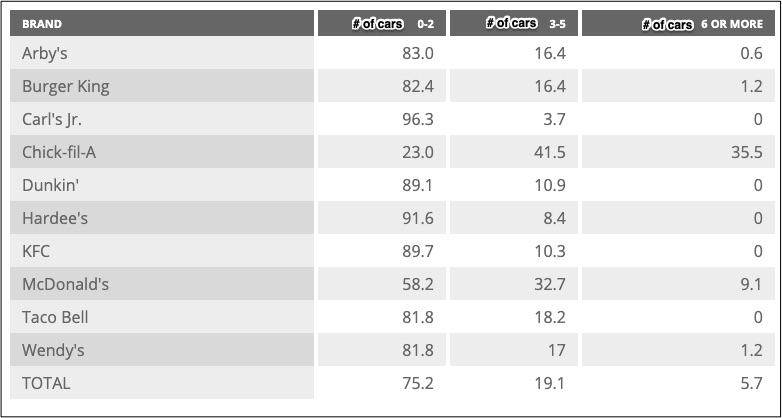 During the 1950s, a milk shake maker salesman named Ray Kroc realized that two brothers had unusually high milk shake sales. Visiting the McDonald brothers’ California roadside establishment, he saw how they speedily served a huge lunch time crowd with their version of mass production. Kroc bought their name, perfected the concept, and conquered a monopolistically competitive market. For monopolistic competition, firms are similar and also they are different. While they do many of the same things (serve food), each has something that makes it unique–hence the monopolistic part of the name.

Along the following continuum, a McDonald’s restaurant would be in the monopolistic competition slot:

McDonald’s quest for drive-thru speed is one way that it has tried to be unique.

My sources and more: This transcript of McDonald’s 2Q 2020 call was a handy way to get up-to-date info on their drive-thru. Next, for the big picture, RestaurantBusiness told more about the pandemic. Then, for other pieces of the puzzle, the NY Times and QSR Magazine had the data.

Why It's Tough to Make a Movie During a Pandemic

What the Pandemic Will Do to Social Security