Why Now Is the Perfect Moment for a Mars Mission

Now is the perfect time to go to Mars. Otherwise we have to wait another 26 months.

Every two years or so, when the Earth and Mars are on the same side of the sun, it’s the ideal time to schedule a visit. Just 35 million miles apart, the (relatively) short distance creates a window that the U.S., the U.A.E., and China will use to learn more about Mars.

Launching between July 30 and August 15, NASA’s Perseverance projects a February 18, 2021 Mars landing. During a mission that will last approximately one Mars year (687 Earth days), they hope to find evidence of ancient life and to try out a Mars helicopter. The rover also will collect rock and soil specimens that a future flight will pick up and take back to Earth.

This 2 3/4 minute video describes their rather complicated plans for the pick up:

Meanwhile, the United Arab Emirates expects a take off tomorrow for its Mars mission. But, rather than land on Mars, their Hope probe will orbit the planet. The goal is to collect data about Martian weather that will let them compare daily and seasonal changes. While it’s a U.A.E project, they collaborated with U.S. scientists at the University of Colorado and will take off from Japan.

China has said that they will launch their Mars mission during the next several weeks. Called Tianwen-1, the name of their Mars explorer means “heavenly questions” and comes from a 2,000 year old poem. Its goal is to orbit, land, and collect data from the planet. (NPR said the specifics are sparse.))

On July 17, the rocket carrying Tianwen-1 was photographed on its way to the launch pad: 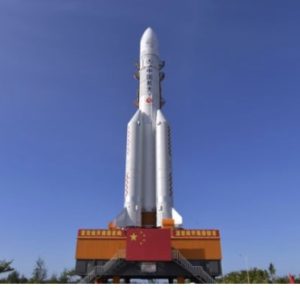 As economists, we can ask who will own the specimens that NASA and perhaps China collect from Mars.

Looking back, we could find a parallel in 17th century New England where the legal right to private property unfolded gradually. Many of the settlers had come from English manors when the land and tools were communally owned. In towns like Sudbury (currently Massachusetts) they continued sharing their land and tools. Soon though, with people moving westward and claiming their own land, private ownership evolved. By the end of the 18th century, we have Alexander Hamilton defending the sanctity of contracts. He knew that the success of capitalism depended on respecting individual property rights.

For outer space, we have a UN agreement from 1967 that precludes nations from declaring sovereignty over planetary possessions and from engaging in military activity. Long after, in the Commercial Space Launch Competitiveness Act (2015) the U.S. Congress said “exploration” and “exploitation” were okay.

You can see that it all is rather vague. Outer space property rights have not been clearly established nor do we know who can make them.

So, when a future Mars mission brings back the rocks that Perseverance left for it, we won’t have definitively established who owns them.

My sources and more: The NASA, the NY Times and NPR are good places for facts about this summer’s Mars missions.  The perfect complement, Politico’s “Who Owns the Moon” discusses outer space property rights.

Our featured image of Perseverance is from NASA.

Who Should Pay the Rent During the Pandemic?