What Kind of Consumer Are You?

In its “State of the Consumer Tracker,” the financial advisory firm Deloitte, looked at the interplay of our health and wealth during the pandemic.

They asked people to agree or disagree with whether they were more anxious than last week. You can see that India, Chile, and Mexico topped the list for their June 9-June 13 survey: 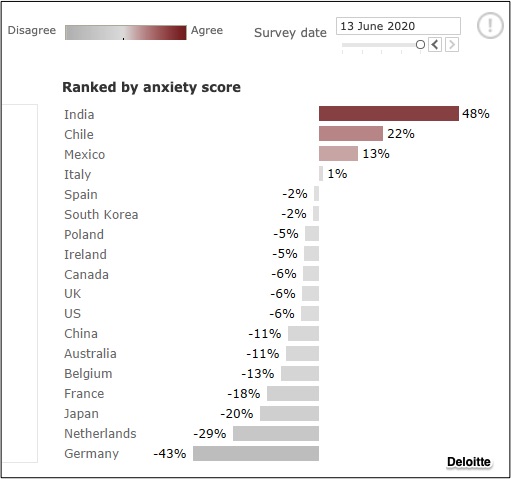 In 18 countries, Deloitte documented how consumers planned to spend their money. For U.S. consumers, the top items were groceries and household goods:

Canadians intended to spend even less:

Then, looking more closely at us, they divided our shopping behavior into four categories. The numbers do not total 100 percent because people could check more than one category.

In the U.S., bargain hunting topped the list (55 percent) and then the stockpilers (49 percent). It appears that convenience (43 percent) and social consciousness (35 percent) were a bit less of a priority.

Meanwhile, last Friday, the U.S Bureau of Economic Analysis (BEA) told us that our spending was up and income was down. They reported that the slide in personal spending since February was partially offset by a record setting 8.2 percent increase in May. But we still are 12 percent less than the February level. As for income, those government checks made a difference: 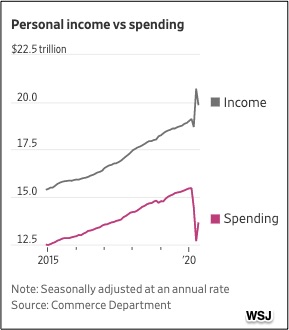 On the spending side, services were hit the hardest with dips for durables (goods lasting three years or more like washing machines)  and nondurables (like clothing, with less than a three year life). Correspondingly, saving is up: 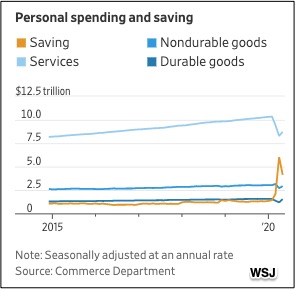 During the pandemic, we’ve had the incentive to save and spend. The lockdowns, temporary (or permanent) layoffs, and record unemployment encourage us to spend less. But those stimulus checks and rock bottom interest rates have nudged us to buy larger items like cars, homes and furniture.

The Wall Street Journal summed it all up for us: 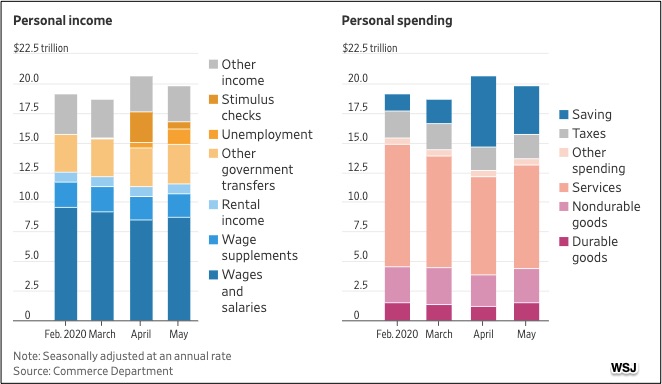 Before the pandemic, at approximately 70 percent of GDP, consumer spending fueled economic growth. Now, with the interplay of health and wealth, we can wonder what will change.

My sources and more: Thanks again to the WSJ morning podcast. They alerted me to the Deloitte consumer study. From there, WSJ described the June 26 “Personal Income and Outlays” BEA report.

How a Pandemic Produces a Misleading GDP

The Sizzling Price of a Francis Bacon Triptych