What Empty Stadiums Could Do To MLB

When dad, mom, and their two kids go to a major league baseball game, they spend approximately $234.38 on tickets, parking, food, and merchandise. If this season is “fan-less,” the revenue hit would be massive.

At their typical 162 game season, gate receipts are close to $2.84 billion. Without fans, the total plunges to zero. Also, with an empty stadium, no one pays for parking, hot dogs, and new baseball caps.

On the upside, national TV contracts remain. At $1.7 billion in 2019, the deals include Facebook, ESPN, Turner Sports, and Fox. The eight-year Fox contract that ends in 2021 was renegotiated for seven more years. Also, MLB has its $2.1 billion from local TV stations, and a $1 billion central fund shared by teams from radio, TV, and assorted revenue sources. Then, to all of that, we can add close to $600 million in licensing and sponsorships.

This table summarizes the estimated revenue for a full 162 game season and one sliced in half. As you know, right now, we are not sure of length nor if fans will be there: 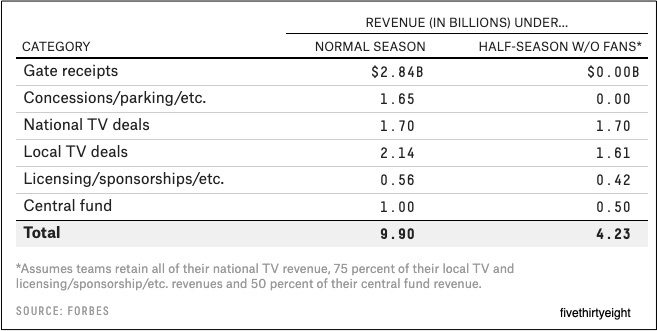 Player salaries will depend on the number of games that could be as few as 50, far less than the usual 162. However, 114 and 81 are also possibilities. Negotiations between the owners and players seem to be moving toward a prorating consensus. Both could be willing to base player salaries on the proportion of the season that they span.

MLB spending estimates assume that a half season would cut expenses by close to 50 percent:

The cuts though have been uneven. Teams still have a front office, staff, minor leagues, and the MLB central office. However, they’ve been furloughing some employees, drafting less, and slashing minor league obligations.

Our Bottom Line: Cost and Revenue

Like all other businesses, Major League Baseball is concerned with its costs and revenue. A firm’s costs can be fixed or variable. Fixed costs are constant like stadium maintenance that continues, even without any games. As for variable costs, player salaries are the ideal example. Based on the number of games, they will rise or fall.

Meanwhile, company revenue can be seen as a total amount when we consider all the firm receives for sales and other services. We also can calculate average revenue by dividing total revenue by the quantity sold. Perhaps most crucially though, we need to know marginal revenue–the amount collected for one extra good or service. When we compare marginal cost and marginal revenue, we can make the best decisions about profitability.

At $234.38, the lost revenue from dad, mom, and the kids is about much more than a game. It reflects the impact of coronavirus on most businesses.

My sources and more: Always good for something interesting,  Fivethirtyeight had the basics for the MLB story. From there, the NY Times, FanGraphs, and CBSSports, had more up-to-date facts, as did USA Today.

The Reopening Role of the Restroom