How a Pandemic Produces a Misleading GDP

In its June 2020 Economic Outlook, the IMF says its projections are uncertain. For now, they suggest that a 4.9  percent 2020  contraction will be followed by a 5.4 percent expansion during 2021:

Looking at specific countries, for 2020, they cite numbers that range from Spain’s -12.8 percent to China’s 1 percent increase: 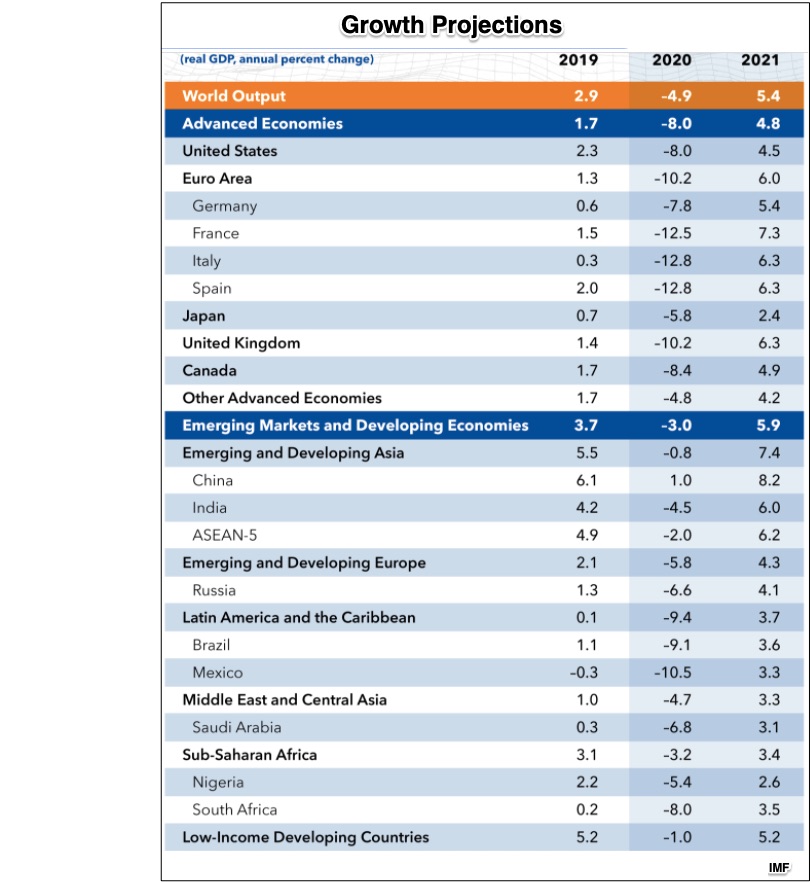 It’s possible though that we have some misleading GDP numbers.

Most simply stated, the GDP is a record of the goods and services we produce each quarter. When their real value (real just means recognizing inflation) goes up, then the economy has grown. From there though it gets more complicated.

Let’s assume the headlines say the GDP was up by 2 percent during the first quarter (January through March). Really though, it was not. Because the BEA (U.S. Bureau of Economic Analysis) annualizes the number, GDP really increased by .5 percent for those three months. But then, they assume it will grow at the same rate for the year and report an annualized growth rate of 2 percent (.5 times 4 quarters). 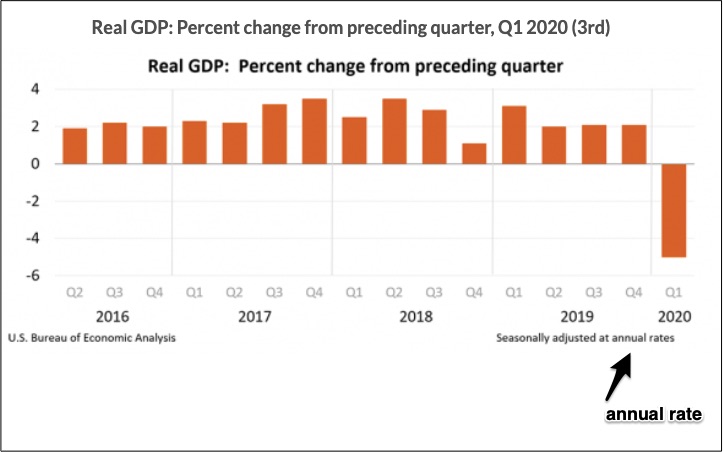 The problem is the distortions. First, we need to remember that the number refers to a full year. With the impact of Covid-19 lockdowns on production, I suspect that one quarter’s number has no chance of representing what subsequent quarters will report. So when, the Atlanta Fed implies that second quarter GDP will contract by something close to 39.5 percent (June 26th estimate), they really mean that the second quarter contraction would be approximately 40/4 or 10 percent.

Furthermore, annualizing ignores compounding. For example, if GDP grew by .5 percent for one quarter, then you have to multiply the increased GDP by that .5 percent each time. The result is actually a 2.02 percent growth rate because that $100 grew to $102.02. Similarly, the current -5 percent does not reflect compounding.

A third consideration is the GDP’s ups and downs. If we say we had a 10 percent contraction, then the economy has to grow by more than 10 percent to return to where it was.

At this point, the uncertainties of a global pandemic necessitate alternative IMF projections which they did present:

Where does all of this leave us? We began with an IMF graphic that said we will have an “uncertain recovery.” And indeed, beyond that, we could see misleading GDP numbers unless we remember annualizing and seasonal adjustment.

My sources and more: Thanks to the IMF blog on the “Great Lockdown,” I learned that the June 2020 World Economic Update was just published. From there, the BEA Press Release came in handy as did this Upshot column from the NY Times. But if you still want more, the Atlanta Fed’s GDPNow model is the next step.

What Kind of Consumer Are You?