The Knockoff Clash Between Dapper Dan and Gucci

Our story starts with a small tailor shop in Harlem and ends with Gucci.

It’s all about what you can and cannot copy.

When Dapper Dan (Daniel Day) tells his story, he begins with a childhood in Harlem, some hustling, selling stolen clothing, returning to school, and working for a newspaper. In 1982, he opens a clothing boutique and soon has an “aha” moment. When a customer shows up with a cheap vinyl Louis Vuitton pouch, he realizes that its LVs make it valuable. As he explains, “This dude was bragging about the pouch. And it occurred to me, if that’s how he feels about the pouch, how would he feel if that Louis Vuitton became the whole outfit?”

Dapper Dan became a high end hip hop fashion designer whose clientele included Mike Tyson and LL Cool J. His custom clothing and car interiors were awash in logos. Populating every inch of a sleeve, an entire jacket, some trim on a dress, his logos included Prada, Vuitton, Gucci, and Fendi.

Standing in the Harlem shop he owned from 1982 to 1992, Dapper Dan is wearing one of his custom designs: 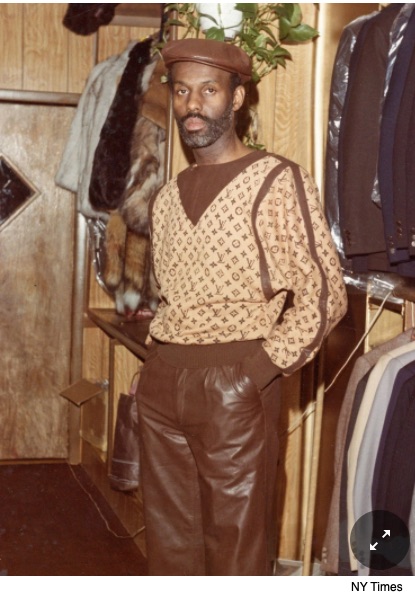 Dapper Dan’s clothing designs were not knockoffs because elite fashion houses were not selling anything resembling what he produced. However, he was breaking the law because the logo was their trademarked property. After ignoring multiple “cease and desist” orders and merchandise seizures, he went underground. But then, Gucci had a Dapper Dan knockoff in its 2018 Cruise Collection.

Below you can see Dapper Dan’s 1980s design on the left and the Gucci version next to it. Except for the LV logos on the original, they are almost identical: 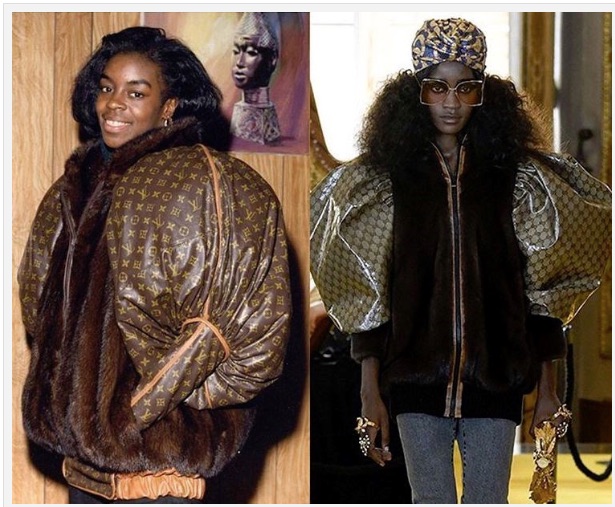 From there, the unexpected happened. Recognizing that they had to answer to  a massive wave of protest from Dapper Dan’s supporters, Gucci hired Dapper Dan. He became one of their fashion designers with the freedom to produce his own styles. His atelier in Harlem now has the Gucci logo…his only logo.

When Gucci’s designers saw the vintage Dapper Dan jacket, they knew they could do a knockoff and call it a Gucci. Illegal? No.

A jacket and most other clothing can be copied because they are utilitarian.  While a logo on the jacket can receive trademark protection, the jacket itself cannot. It’s okay for Gucci to copy the Dapper Dan jacket. But he broke the law when he used their logo.

What we are really talking about is intellectual property. Intangible, intellectual property can be a manuscript or a design. The Dapper Dan experience displays where we do and do not have intellectual property rights. It also takes us to the debate. Some support the right to create knockoffs because they lead to fashion trends. They enable all of us to have what might have been reserved to those who are affluent. Others disagree saying smaller designers like Dapper Dan have little power when a fashion behemoth like Gucci usurps his work and calls it their own.

The debate over intellectual property rights goes way back to Alexander Hamilton. Convinced it would foster invention, protect infant industries, and thereby stimulate economic growth, as Secretary of the Treasury, during the 1790s, Hamilton promoted a patent system.

I wonder how he would have felt about Dapper Dan.

My sources and more: To enjoy a good podcast, do listen to the 99percentinvisible story of Dapper Dan and, for more, I recommend this NY Times article. However, if you just want one source on the bigger issues, I recommend this TED talk on fashion.

The Innovations That a Pandemic Inspires

May 2020 Friday's e-links: A Cartoon, A News Podcast, Business Wars, and a Disaster Story