The origin of airmail is sort of like NASA using SpaceX.

When airmail first began in 1911, pilots dropped mailbags from the plane to the ground where a postal worker retrieved them. Seven years later, the postal service borrowed Army planes and pilots to fly the mail across the U.S. Both were happy because the Postal Service needed speedier delivery and the Army Signal Corps pilots needed more practice.

Below, in approximately 1921, these three men were cranking a typical mail plane’s engine. It was a DeHavilland DH-4: 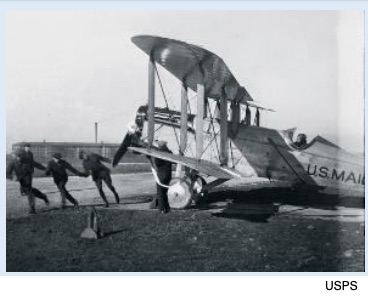 But the cooperation didn’t last.

Here, we can leap to SpaceX.

A decade or so ago, NASA no longer wanted to depend on the Soviets to ferry astronauts to the International Space Station. NASA’s equipment was old and the expense was sucking billions from their budget, money that could have been used for the moon or Mars. So they decided to “outsource” the Space Station shuttle. Whereas it would have cost NASA close to $34 billion to do it all themselves, instead, they established a mini-competition between Boeing and (Elon Musk’s) SpaceX to develop a new space shuttle. Boeing received about $4.8 billion and SpaceX, close to $3.1 billion.

At this point, having honed procedures and equipment, SpaceX became the Southwest (the airline famous for savvy cost-cutting) of the rocket industry. But the really big savings came from a re-usable booster stage engine. Under NASA, gone forever, the Challenger boosters dropped into the ocean. SpaceX designed an engine that would do a soft landing.

Now, with Boeing a year behind, SpaceX (and its Tesla) were ready for this week’s May 27th flight. A Tesla Model X, provided by SpaceX’s sister company, took the astronauts to the launchpad. Sadly, minutes from liftoff, because of weather, they postponed to tomorrow. Do take a look at this awesome animation:

SpaceX is also ready for business from space tourists who reputedly would pay as much as $50 million for a five day flight.

Our Bottom Line: A Mixed Economy

Although tradition, command and the market are the three basic economic systems, most economies are combinations of all three. With SpaceX and NASA we have the market’s supply and demand optimizing what government (“command”) can do.

More than a century ago, the Postal Service achieved the same synergy with the aviation industry.

My sources and more: After listening to The Daily’s (NY Times podcast) SpaceX discussion, I was hooked. The podcast took me back to the first airmail pilots. It also led me to CNBC and BusinessInsider. It is all fascinating.

May 2020 Friday's e-links: A Penguin Race, Two Podcasts, a Cartoon, and One Good Book