Why We Worry About “Murder Hornets”

A Big Mac bun is made from wind pollinated grain. The beef comes from cows fed with pollinated grasses and grains. The Big Mac’s “Special Sauce” needs paprika and that means bee pollinated peppers. Also requiring pollination, the onions, the pickle, and the annatto that colors the American cheese are Big Mac basics.

We could go on but you get the picture. From paprika to pickles, bees reputedly pollinate one third of all we eat.

Where are we going? To pollination and then the “murder hornet” in our featured image, above.

These are the routes: 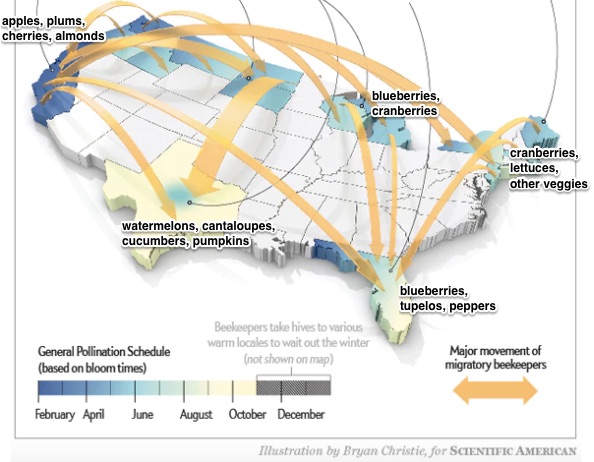 You can see why it was worrisome when the “murder hornets” that destroy hives were seen in Washington state.

The place is Custer, Washington. During November, 2019, a beekeeper saw a stack of decapitated bee carcasses in front of a hive and then thousands more inside. The murderer could have been the Asian Giant Hornet. Attacking hives for the bee thoraxes that their young eat, these hornets are as long as two inches and can kill as many as 30,000 bees in several hours. One beekeeper said the pain of being stung was  like, “red-hot thumb tacks being driven into my skin.” In Japan, annually, as many as 50 people have been killed by the “murder hornets.”

At this time, only two Asian Giant Hornets have been sighted in Washington. The worry though is that they could multiply and threaten the U.S. bee population. In Japan (shown in the following video) the bees have adapted and survive by “cooking” the invaders. But European and U.S. honey bees are not equipped for the battle.

Do take a look at this riveting 3-minute video of a hornet attack and the bees’ astounding response:

Recognizing the importance of acting early and swiftly when a disaster could be imminent, the state of Washington is mobilizing to eradicate the Asian Giant Hornet…

And to protect our Big Macs.

My sources and more: Today, The Daily podcast was my starting point. From there, I read about the Asian Giant Hornet in the NY Times and BusinessInsider.

Parts of today’s bee pollination description were in a previous econlife post. Our featured image is from the Washington State Department of Agriculture via Business Insider.

The Best Way to Social Distance at a Restaurant