Last Friday could have been called Government Shutdown Day.

First, the Congress didn’t approve a federal budget during September. But then they needed some other way to pay the bills. So they passed a continuing resolution (CR) that perpetuated currently approved spending. When September’s CR expired last Friday, the government would have shut down unless they passed a new CR.

It appears that the new CR was not a sure thing. Supporting their constituency, several lawmakers said no unless coal miners got an extension of their health benefits beyond four months. But at the last minute they decided a government shutdown was not worth it. And we got our CR.

Typically extending through the end of the government’s fiscal year (September 30), this CR is different. It ends during April to let our new President have a say.

The spending side of the federal budget:

Our Bottom Line: The Budget Process 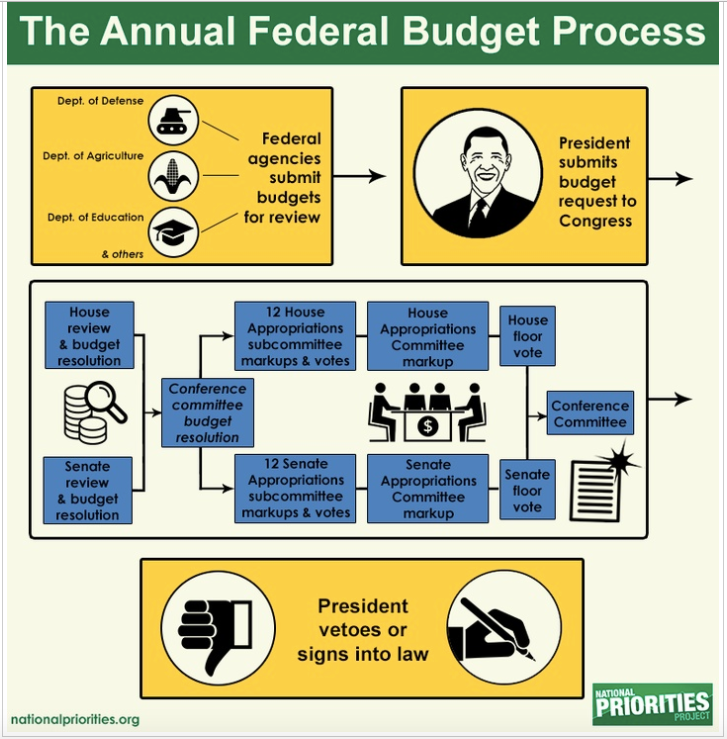 The federal budget is rather like a recipe for spending close to $4 trillion. Involving many “chefs,” the process is supposed to end with the President and Congress agreeing. From his side, the President figures out the numbers and submits them to the Congress each February. Meanwhile the Senate and the House have to approve 12 appropriations bills. When the fiscal year ends on September 30, the budget should be complete. If not, they fall back on the CR and specific spending bills. If that does not work, the government shuts down.

Why? According to Article I, Section 9 of the Constitution, they cannot keep spending without . “… Appropriations made by Law.”

Our takeaway? Keep an eye on April when President Trump can influence the new CR.

My sources and more: For the story of how fiscal policy works through the budget process and the source of the above flowchart, I recommend looking at articles from the National Priorities Project. Meanwhile, the Congressional Research Service provides all of the detail and explanation you might ever want to know about the budget process here and here. Then, to complete the picture, you can find facts about the current CR here and here.

Please note that several several sentences from this entry have appeared previously in econlife.

How To Give the Best Gifts