With just 13 minutes from “click to plop,” Richard B. got his Fire TV and a bag of popcorn. Delivered by an Amazon Prime Air drone, the package had to weigh less than five pounds and could fly only during daylight and clear weather. As one of Amazon’s two “beta” customers for its UK drone program, Richard was ideal because his huge garden is near the fulfillment center. 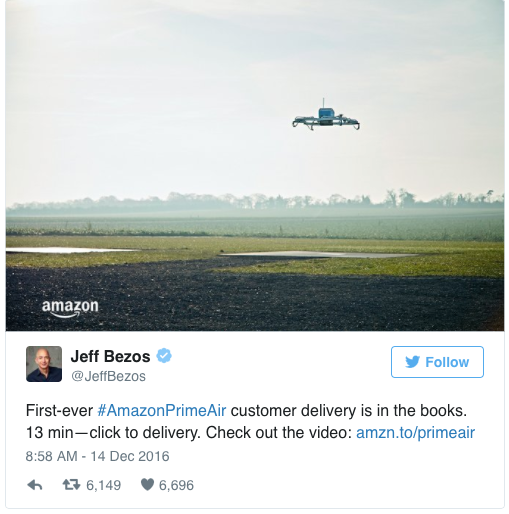 Where are we going? To saving money.

The Cost of a Drone Delivery

Lowering the cost of the last mile–that leg from the final storage hub to the home– is a retailer’s dream. So, for all their excitement, when we get down to basics, drones are about saving money. For Amazon’s “last-mile,” a Deutsche Bank note on delivery automation estimated an 80% savings.

Looking at a shoebox delivery, Deutsche Bank said cost ranged from $6.00 to $6.50 for UPS or FedEx  premium ground to the $2 that the last mile costs the USPS. Meanwhile, drones are a mouthwatering $.05 per mile of delivery.

Let’s assume that Amazon decides to charge us $1 for drone same day delivery. Still, the drone is far cheaper than a delivery person using a truck, a van or a bike. Combine that with instant gratification and you have customers who need no stores.

My sources and more: Combining the Guardian and Bloomberg, you can get a pretty good picture of Amazon’s first drone delivery. Then Businessinsider has the cost side facts that can remind us of the moving assembly line that Alfred D. Chandler describes in Giant Enterprise. Out-of-print, the Chandler book is worth the effort it would take to get a copy.

Why Southwest Airlines and Zara are Similar