For this year, the data conflicts. While the Wall Street Journal and the IMF say Venezuela is on its way to hyperinflation, Johns Hopkins economist Steve Hanke says the rate is closer to 70%.

What we do know is that retailers are being paid with mountains of cash. According to Bloomberg, some stores in Venezuela have begun to weigh the money they get from customers rather than count it. Then, what to do with all of that cash? The longer you keep it, the less it is worth. (I have read of multiple trips to the banks each day.) 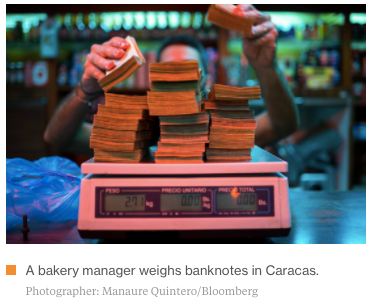 In Brazil during the early 1990s, supermarkets had to place new stickers on items every morning. To beat the price changes, some people arrived at opening times, running ahead of the staff. Charge accounts? Surely customers would have loved them but I doubt if they were available. A day later, you would owe much less! The Troubled Currency Project tells us that Brazil’s cumulative inflation rate from 1900 to 1999 was 167,545,602.8%.

Calculating inflation rates for countries like Venezuela and Brazil is tough because of limited and inaccurate official data. But this World Bank map does give us a snapshot of inflation hot spots:

Lacking the normal signals that prices convey, supply and demand enter their own world of perverse incentives. In a world where the value of money is cascading, businesses don’t want to hold on to cash and consumers need to spend what they have. No one has the price information they need to plan productively for the future.

My sources and more: For the weighing money story, Bloomberg has the details while this Hyperinflation Survival Guide in Google Books explains the supply side challenges of high inflation. However, for the most dependable inflation data and analysis, I recommend Dr. Steve Hanke’s work. Please note that Dr. Hanke’s hyperinflation threshold is 12,875 percent, year over year.