Today, let’s take a look at what three markets are saying about the U.S. presidential election.

The Mexican peso/dollar foreign exchange market says that Mexico would not be pleased with a Trump win. During early August the peso rebounded when Trump’s chances declined and it sunk when Hillary announced her pneumonia.

You can see below how Clinton’s strong debate performance buoyed the peso: 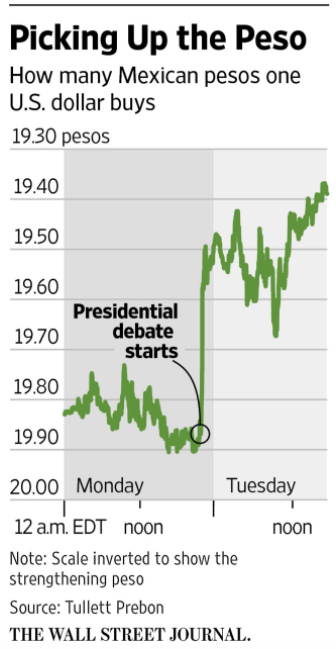 And yes, after the FBI resurrected the Clinton email issue, the peso was down by 1.8%.

Meanwhile, Halloween costumes favor Trump. This year, in one poll Trump costumes won 55% to 45%, while a costume manufacturer said his sales indicated a Trump landslide.

Since 1996, costume preferences have accurately predicted presidential elections. This year though our data is somewhat problematic since people bought Trump costumes to make fun of him.

Betting markets also can provide election result clues. At the University of Iowa, the IEM (Iowa Electronic Markets) is a real money futures exchange where participants buy contracts that are priced through supply and demand.

Explained on the IEM website, “Contracts for the correct outcome pay off at $1; all other contracts pay off at zero. As a result, the price of the contract at any given time is the probability that the traders believe that event will happen.” The maximum investment is $500.

At 56/47, the numbers are remarkably close to Halloween mask sales.

Our Bottom Line: The Wisdom of Crowds

Composed of many participants, the group that composes a market uses supply, demand and their equilibrium price to send a message. For the U.S. presidential election, we need only look at peso trading, Halloween costume markets and presidential futures to see what markets are predicting.

My sources and more: Thanks to my former student and friend Mira K. who suggested using the peso election barometer. From there, I realized we just needed to look at markets to find other election indicators like Halloween costumes and the IEM. But, if you just want more on the wisdom of crowds, James Surowiecki’s book is excellent.