What an Egg Says About the Cuban Economy

On most lists of Fidel Castro’s successes in Cuba, healthcare and literacy are at the top. But let’s start with eggs.

When University of Chicago economist Casey Mulligan went to Cuba several months ago, the eggs grabbed his attention. Sold in state stores in trays of 30, they are unrefrigerated, unlabeled, and have no sell-by date. Also, the trays are inconvenient since most Cubans don’t have a car.

Seen through its window, a Cuban state-run food store;

Where are we going? To command economies.

I am just not sure about the quality of Cuban healthcare. This graph indicates the conventional wisdom that Cuban medical care is good. According to World Bank statistics, mortality rates for 2013 are better than the U.S.:

However, Dr. Mulligan indicates that the facts do not quite add up. He wonders why Cuba didn’t surpass U.S. life expectancy by now if it caught up to it in 1973. Yes, plastic surgery and abortion are free but the supply of hospital equipment is inadequate. And patients need to bring their own food, pillows, and aspirin when hospitalized. His point? Are their statistics accurate? 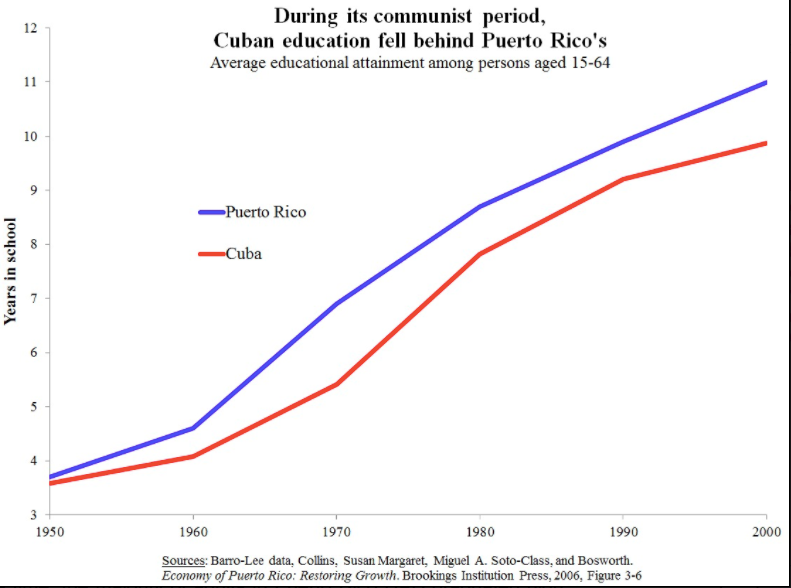 Dr. Mulligan compares Cuba and Puerto Rico because both are former Spanish colonies whose per capita GDP was $350 in 1950. By 2014 though, their growth paths had diverged considerably:

After 1959, Fidel Castro implemented a Communist economic system that placed government in charge of production and distribution. True of most command economies, the result was skewed incentives that constrained economic growth, eliminated individual freedom…

My sources and more: With Fidel Castro (1926-2016) having died on Friday, Casey Mulligan’s discussion of his Cuba visit in his blog (here. here, and here) and at econtalk was especially relevant. In addition though, you might want to look at Quartz for the contrasting view.

The Travels of Our Jeans

Why More Manufacturing Does Not Mean More Jobs