China’s social credit program is usually connected to social control. But I wonder if it’s also an economic system.

Using information from “government blueprints, state-media reports and interviews with architects,” WSJ described what appears to be an evolving plan. Most basically, the plan’s credit numbers partially determine people’s privileges and purchases by rating the tangibles and intangibles in their lives. On the input side it decides if they promptly pay their bills. It records whether they jaywalk. Not visiting an elderly parent regularly could mean a penalty.

One pilot project in Jiangsu province experimented with a 1,000 point system. Citizens would gain points for good behavior and lose them when they violated a rule. An online false accusation could result in a 100-point penalty. But if you won a “national honor” you could get 100 points. The key though was the incentive. People with the highest scores got the perks like a promotion at work.

Below you can see that your score could determine whether you can stay at a luxury hotel and get fast service in a government office. It would mean access to jobs, loans and a seat on a high-speed train: 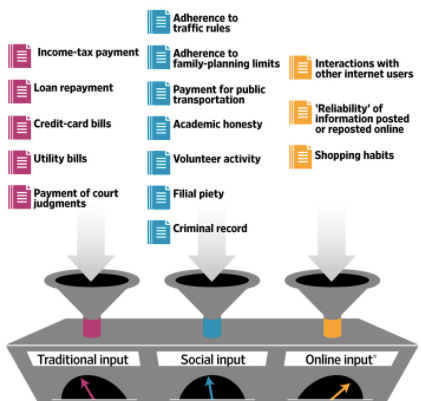 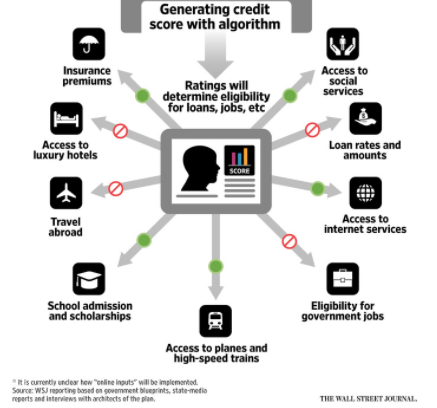 Our Bottom Line: A Mixed Economy

The social credit program reinforces China’s commitment to a mixed economy. So yes, they have capitalism. But also, as a decree from government, the social credit system would be the ultimate in central planning.

Best representing the mixed (and perhaps contradictory) character of the Chinese economy, we have Alibaba, listed on the NYSE and based in Hangzhou, with a subsidiary that is gathering the data for those social credit scores.

My sources and more: Combined, this WSJ article and the Washington Post presented what we seem to known about China’s plans for a social credit system.

Why More Manufacturing Does Not Mean More Jobs

Is Your Lack of Sleep Hurting the GDP?