Decades ago, people would have thought that anyone who wanted to sell water was crazy.

Vitality sells its air on Amazon.

On a hilltop, Aethaer demonstrates its air farming (a woman running across a field with a wind sock) on YouTube:

You (and I) might be wondering if this is one giant put-on but BBC and Washington Post reports have confirmed that air producers’ (gatherers? canners?) sales are mounting in China, India and beyond.

For air quality, there is a developing-developed nation divide. If we look at cities with more than 100,000 people, 98% fall below WHO air quality guidelines in lower and middle income countries. The number drops to 56% for high income countries. As for regions, you can see below that the worst air pollution (and highest air sales) is in the Eastern Mediterranean and Southeast Asia. 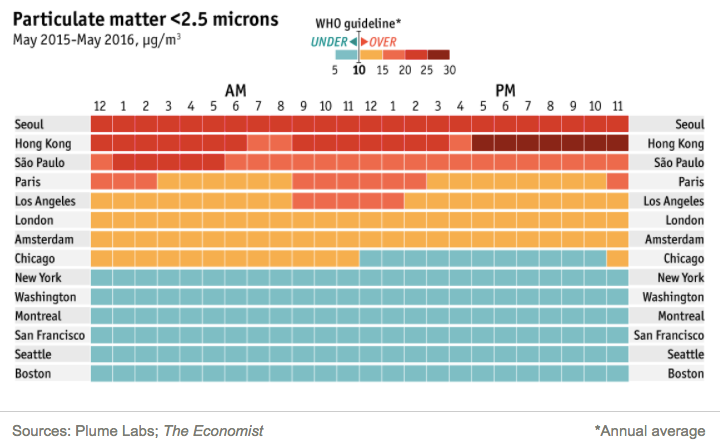 Our Bottom Line: A Tragedy of the Commons

Whether looking at an overgrazed pasture, a messy office refrigerator or air pollution, people have the incentive to abuse publicly shared resources. Because of our individual benefit, we tend to ignore the aggregate impact. Faced with dueling incentives, we choose our private quest for profit and our country’s desire for economic growth over the world’s cleaner air. And therein lies the tragedy of the commons.

My sources and more: I first discovered the existence of bottled air in the NY Times and then through Mashable, the Washington Post and CNN. Finding up-to-date data for air pollution was tougher but I do recommend the Economist and WHO. Also, the tragic current situation in Delhi that has led to 1800 schools closing from severe air pollution is described here by the BBC.

Why Twinkies Needed a Longer Life

How to Maximize Tax Revenue in Unexpected Ways