The Tax That No One Likes

In several weeks, my gasoline tax will increase by 23 cents a gallon.

N.J. lawmakers had no choice. The trust fund that pays for roads and road repairs was about to run dry. Except for anything essential, spending was frozen.

With red states the highest and yellow the lowest, N.J. (below) had by far the lowest gas taxes in the Northeast: 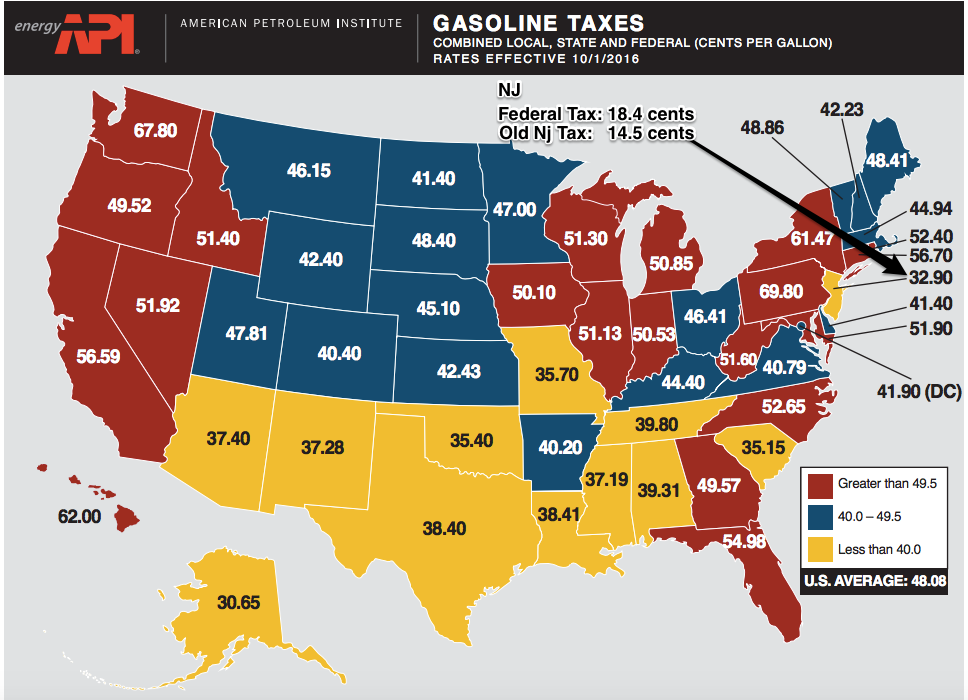 According to a recent Indiana University study, few people support gas tax hikes. When researchers asked respondents which of five revenue sources they preferred, highway tolls won with 33.8%. Least popular, the income tax and sales tax were at the bottom while the gas tax was in the middle at 22.8% and a mileage user fee got 20.9% support.

With one-third saying they supported none of the five alternatives, the study said to me that people (predictably) have a tepid reaction to taxes.

Philosophically it makes sense to use gasoline taxes for state and federal highway trust funds. Representing a “benefits received” philosophy, the tax said that drivers should pay for their roads.

The downside though takes us to another tax philosophy. If you believe that taxes should come from the affluent rather than those with smaller paychecks, then a higher gas tax is not the answer. Called a regressive tax, every penny at the pump takes a higher percent of the income of those who earn less than those with more.

You can see why it took N.J. 28 years to increase its gasoline tax. And the federal gas tax has been the same since 1993.

My sources and more: Washington Post Wonkblog alerted me to the Indiana study (gated), Forbes had an interesting history of gas taxes, and there were countless NJ.com stories of the new N.J. gas tax. Please note that Our Bottom Line was published in a past econlife.

Why the Big Mac is Like a Model T

An Easy Way to Prevent a Traffic Jam