The Downside of Cheap Gasoline

When the price of crude plunged, analysts applauded. Expecting a GDP boost from cheap gasoline, they said consumers would have more to spend while foreign oil companies suffered.

It did not quite work out as they expected.

The gas price drop depended on where you live. With Los Angeles shown by the top blue line and Houston, the bottom yellow line, you can see how prices varied:

Lower gas prices meant that all of us had more to spend elsewhere. Although a closer look reveals that different household incomes created a varied response, the common thread was a spending shift. We started spending less on public transit because some of our savings went straight back into the gas tank. But we ate out and shopped more.

Below is a JPMorgan Chase Institute infographic that summarizes where our gas savings went during 2015: 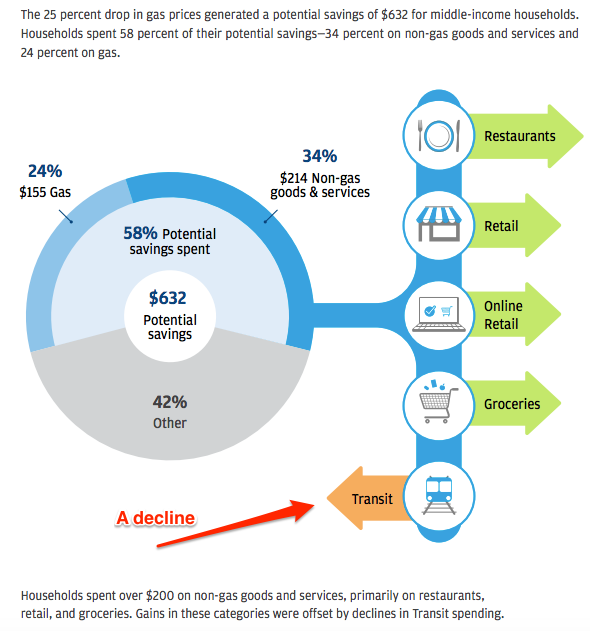 Now only 27% of what we use, imported petroleum used to fuel most of our economy. So yes, when crude tanked foreign firms suffered and the savings nudged domestic demand upward. Now though our energy independence means that U.S. firms are experiencing the layoffs and decreasing new equipment purchases.

Statisticians suspect that these supply side cutbacks have offset any new consumer spending. Some even estimate the impact is negative. Furthermore, by constraining inflation, lower gasoline prices have jeopardized the Fed’s attempts to raise interest rates.

Composed of spending from consumers, government, businesses, and exports minus imports, the GDP measures annual production.

Consumption: When oil prices went down, the consumption component of GDP was supposed to benefit. It was an unpredictable boost though because no one could be sure of where the new spending would exceed previous gasoline outlays.

Gross Investment: Then, the capital goods part of business spending (also called gross investment) diminished as oil and gas investment dried up. After all, why buy new equipment if your return would be low and your current revenue had fallen.

The result? The impact of low oil prices on GDP has been negligible.

My sources and more: If you just read one article, this NY Times column explains the impact of lower oil prices. Next, for a consumer spending focus, JP Morgan/Chase has a readable report chock full of infographics. Please note that I added “during 2015” to the sentence before the spending infographic. Especially because restaurant spending has been down during 2016, emphasizing the year was crucial.

The Best Country For Libertarians