The Washington state legislature will soon vote on a win/win emissions reduction law. But it could lose.

Predictably, petroleum is a bigger source of carbon dioxide emissions than natural gas and coal:

If passed, Washington’s new law is supposed to diminish gasoline consumption and reduce taxes. To lower consumption, the emissions tax initially adds 25 cents to a gallon of gasoline. It also boosts a monthly electric bill by $8. On the reductions side, the state sales tax and business taxes will be lower. Targeting low income workers, a $1500 tax rebate completes the deal.

The concept worked in British Columbia. Its result was a 7% drop in fuel consumption and a 4% rise in an average car’s fuel efficiency. 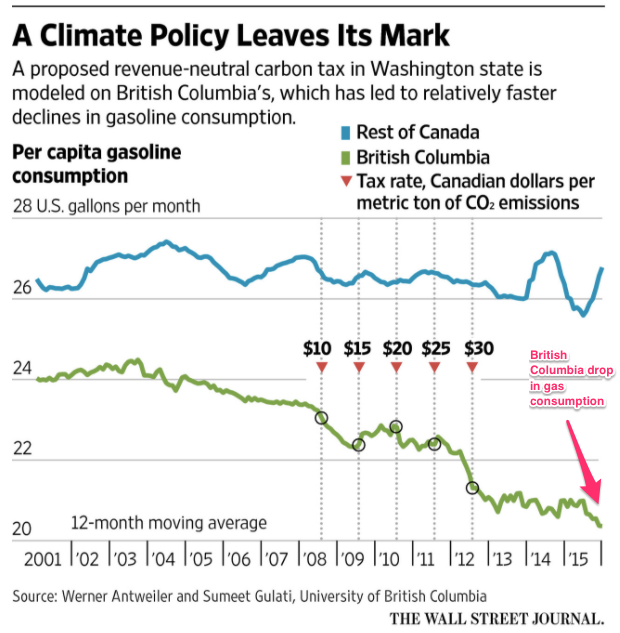 The economist who proposed the new law thought that environmentalists would be pleased when emissions went down. Meanwhile those who care more about economic growth can also celebrate.

The problem? The law might not pass. According the the Wall Street Journal, major environmental groups want alternative energy development to receive the new tax revenue.

Made famous by Cass Sunstein and Richard Thaler, the idea of the nudge has caught on. To behave appropriately, whether looking at our retirement saving or electricity saving, all we need is the right kind of incentive–the right nudge. That could mean a default so we do not have to decide to save for retirement because it happens automatically.

Or, it could be a climate change package that nudges us to buy less gas and create more economic activity.

My sources and more: While this WSJ article provides insightful analysis of the legislative proposal, the EIA’s monthly report has more facts than you could ever need. Finally, here is the primary source copy of the law that Washington is debating. Please note that part of “Our Bottom Line” was in a previous econlife post.

How the World Helped to Create a Cheese Glut