Election Economics 2016: Why It’s Tough to Prove the Benefits of Trade

Our Tuesday focus on the election:

Hillary Clinton and Donald Trump have expressed their disapproval of the Trans-Pacific Partnership (TPP).

Where are we going? To why economists disagree with them.

The two best words that describe the TPP are market access. Goods and services will be able to move with ease among the signers as supply chains interlock, tariff and non-tariff barriers are eliminated and common protections are established for areas that include intellectual property, labor and the environment.

These are the 12 TPP nations and their existing free trade deals (FTAs):

It appears that although most economists believe that free trade is beneficial, many average Americans disagree. When 41 economists and 1000 households were asked the following question in a University of Chicago Booth School study, the split between the two groups was disturbingly evident:

“On average, citizens of the U.S. have been better off with the North American Free Trade Agreement than they would have been if the trade rules for the U.S., Canada and Mexico prior to NAFTA had remained in place.”

Even when told that economists disagreed with them, only 5% of the participants changed their minds.

So why won’t American households agree with the economists?

It is probably because of the unseen.

It is tough to recognize what we gain from the export side of trade. Just one example, our movie industry generates more revenue abroad than from North America. Below you can see the numbers from the Wall Street Journal: 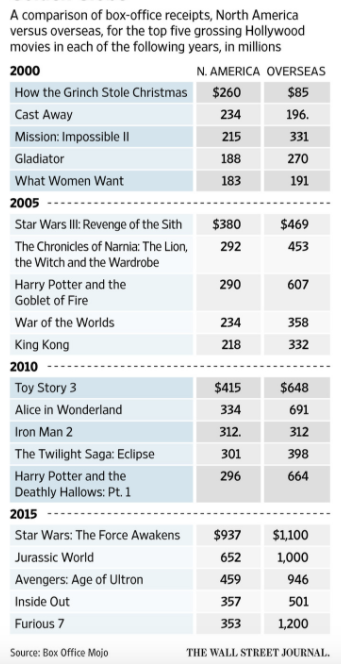 Similarly, it can be easy to ignore that we have more of a variety of goods and services because of trade.

Implemented in 1994, NAFTA opened the U.S. to Mexican and Canadian fruit growers. As a result, by 2012 the amount of fruit we were eating from Mexico and Canada had doubled while we consumed three times as many of their vegetables. Or, thinking of a pre-NAFTA world, please just imagine supermarkets with many fewer Mexican avocados, cantaloupes, grapes, mangoes, papayas, limes, strawberries and watermelon.

When items are made more cheaply elsewhere, we pay less for more. In Trans-Pacific Partnership: An Assessment, Peterson Institute economists estimate that the lowest income quintile of households get the most benefit from increased imports. Their reason? Lower income families spend a larger proportion of their income on food and beverage than those who are more affluent. Consequently trade enables poorer households to save money on better clothing, cars, food and electronics. Meanwhile, competition puts pressure on U.S. producers to innovate and cut prices.

The Cost of Preserving jobs

However, by adding $1.1 billion to tire spending in 2011, we could say that each additional job cost $900,000. Furthermore, by spending more on tires, consumers had less to spend elsewhere.

If all else fails, then economists refer to comparative advantage.

First explained by 19th century economist David Ricardo, comparative advantage tells us that we fuel economic growth when nations produce what they are relatively best at.

For example, what if you can teach a class skillfully or mow your lawn expertly while your neighbor can mow the lawn mediocrely or get paid minimum wage at a fast food restaurant? Then you should teach, she should mow for more than the minimum wage and everyone will be better off. The reason? You sacrifice too much by not teaching when you mow and she would sacrifice too much if she earned less at her fast food job.

You can see why it’s tough to prove the benefits of free trade.

My sources and more: In the media and academically, articles supporting trade are everywhere. Yesterday’s Wall Street Journal had the statistics on the film industry, while the Peterson Institute has the economic analysis here and here. And I especially had fun with the Chicago paper on average Americans and economists. Please note that several sections from today’s post were published in a previous econlife.

The Importance of a Beer Pipeline

The Impact of a Robot Queue