A recent NY Times article on women’s life expectancy grabbed me when I realized where you live could affect how long you live.

In the following map, the green states represent lower female mortality rates and potentially longer lifespans. At the other extreme, the red states, including Nevada in the West, Pennsylvania on the East Coast, and Illinois in the middle have the higher mortality numbers. The map (below) is based on the 1990 statistics that formed the basis of the 2016 study: 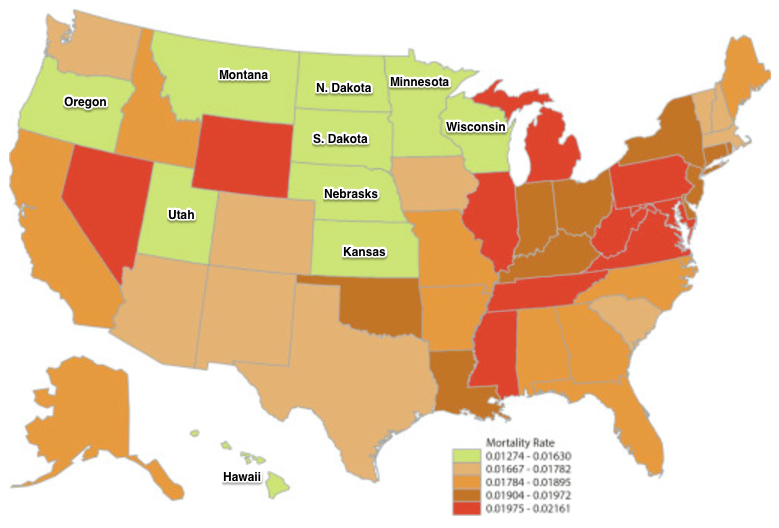 The Economics of Life Expectancy

Researchers are somewhat mystified as to why a national healthcare safety net has not equalized female mortality numbers. After all, access to Medicare, Medicaid and Social Security Disability is nationwide. To find some answers, they decided to dig into new data from a National Longitudinal Mortality Study. The data led them to hypotheses about the impact of our “context” on our longevity.

While they said lots more, their report repeatedly returned to the reach of local fiscal policy. Referring to an economic “context,” they considered state spending on education, transportation, and social services. They determined whether the result was accessible jobs, safe public spaces, quality schools and accessible recreational facilities. They asked if taxes were regressive, if housing was affordable, and whether tobacco use was discouraged.

The list is long and we could continue onward but you get the picture. The economic environment created by state and local government correlates with female mortality rates.

Reading all of this, I wondered how long we were living. Through the following map, you can see that female life spans vary considerably in the U.S. Much more than in other developed nations, in 2000, they varied as much as 7.4 years.

Defined as a positive or negative impact on an uninvolved third party, the externality of a state’s economic policies can be the length of a woman’s life.

But even knowing the externality does not entirely solve the mystery of why female life expectancy varies in the U.S.

My sources and more: For a good summary of the academic research on female mortality, this NY Times article is a good starting point as is this article on the flattening of life expectancies. Then, for that frivolous article that conveys fascinating information, I recommend the Atlantic’s comparison of each state’s life expectancy to another country.

The Problem With the Soda Tax

How a Chicken Could Decide Where Your Drone Will Fly