Where are we going? To why time matters.

During March, DST starts when we move our clocks ahead by one hour. Then it ends in November when our clocks “fall back.” If Massachusetts decided not to fall back or spring forward, then it could have Atlantic Standard Time all year long. 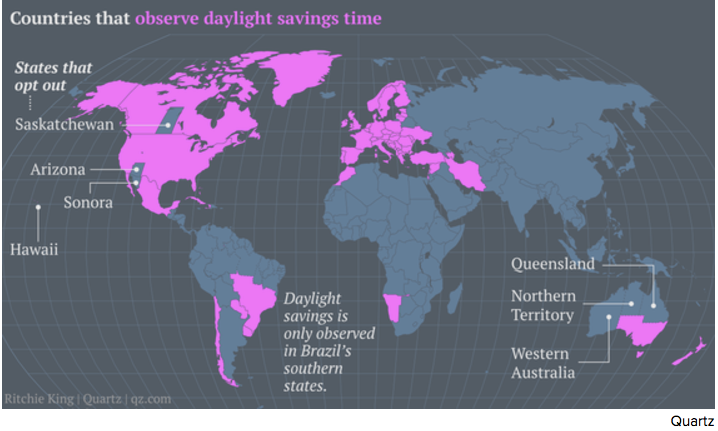 Retailers might like the change because Atlantic Standard Time creates more daylight for winter shopping. The sugar lobby would be happy, considering that they urged Congress to lengthen DST by one month so that trick or treating would last longer. Also though financial markets would have to adjust as would plane, rail and bus schedules.

So yes, some confusion, but they might diminish the number of work injuries and auto accidents that increased when the time switched, get more daylight when kids leave school, and people in Boston would not be eating lunch three hours before the sun sets. (On December 9, the sun set at 4:11.) One proponent even suggested that college enrollment would go up.

Appointed by the legislature, a Massachusetts task force will be assessing the impact of a time change on the economy, health, energy conservation, education and transportation. Their report is due by the end of July, 2017.

Called transaction costs, the hassles that complicate a purchase diminish economic efficiency. Those hassles could simply include listening to the same voicemail menu every time we call CVS.

For nineteenth century railroads, servicing hundred of communities with different times increased the transaction costs of traveling. To lower their transaction costs, in 1883, the railroads divided the U.S. into four time zones. In 1918 Congress made those four time zones the law of the land and added a DST provision that they canceled the next year. It took until World War II for Congress to reconsider Daylight Saving.

Now, with the Massachusetts legislature questioning the wisdom of DST, they are moving toward more economic efficiency.

My sources and more: Starting with one Massachusetts resident who believed DST was unnecessary, I found additional support for adhering to Atlantic Standard Time in Quartz, the Atlantic, and Bloomberg. But, if you are really interested in U.S. time, your best source is Keeping Watch: A History of American Time,

What We Don't Know About Corporate Taxes