The Problem With the Soda Tax

Telling us that Berkeley’s sugar-sweetened beverage (SSB) tax had fizzled, an August 2015 paper explained why.

Where are we going? To the unpredictable impact of a soda tax.

Berkeley’s basic idea was to tax the supply side. Once a soda distributor had a one-cent-an-ounce tax to pay, she would pass it along to the retailer who would charge customers more. Instead though, the pass-through was less than anyone expected. With prices minimally rising, soda consumption minimally fell.

A study published during October 2015 concludes that the tax did exactly as intended. Passed during November 2014 and implemented the next March, the tax might be the reason that soda consumption was down by 21% in low income areas of Berkeley.

In Mexico, a soda tax at first had huge success but then went flat. 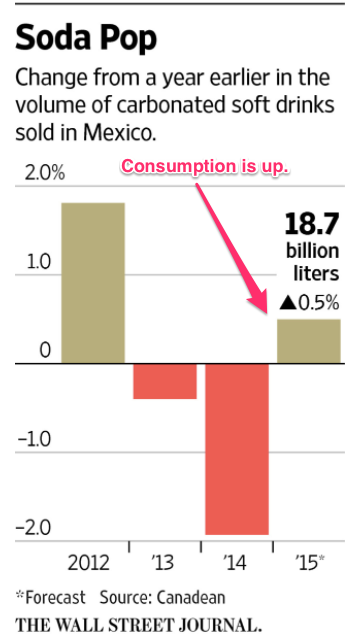 Unless it is sufficiently high, a soda tax is unpredictable. In Berkeley, we wound up with conflicting studies while the impact of Mexico’s sugary beverage tax changed. Three economic ideas can explain (but not eliminate) the confusion.

Depending on price, most of our our buying behavior will be elastic or inelastic. Our demand is elastic if our response to a price change is considerable. Just the opposite, inelastic buying behavior means we stick with a good or services even when the price soars.

For soda, our demand is elastic when there are many substitutes because when price goes up, we can buy less and switch. However, if that substitute is an equally unhealthy beverage, then the price hike will not affect obesity. Switching, though, could be difficult if the tax increase is for a broader category like SSBs rather than just soda. But couldn’t soda buyers just make the purchase outside of Berkeley?

When a SSB tax is passed, we can never be positive who will actually pay it. Called the incidence of a tax, the burden might have been borne on the supply- or demand-side by distributors or bottlers, retailers or consumers. If the consumer bears the incidence and demonstrates elastic demand, then the tax is having the intended effect.

Finally we cannot forget that soda sales are down.  Moving away from financial incentives, demand could decrease and shift to the left simply because soda drinking is less socially acceptable.

So, with the new Philadelphia tax on sugar sweetened and diet beverages, what can we expect?

My sources and more: Telling us that the Berkeley tax was unsuccessful, the research team that wrote this paper disagreed. Meanwhile presenting a third batch of results, WSJ describes the Mexican soda tax. Also, dry but chock full of facts, this discussion of nutrient and product-based taxes sheds light on the Berkeley initiative.

The Importance of Being Similar