A New Reason To Worry About Social Security

Asked when to start worrying about Social Security, most of us would say 2034. Until then we have trust fund money as a back-up. Totaling close to $2.8 trillion, the Social Security Trust Fund gets the surplus when payroll tax revenue exceeds expenditures. Invested in U.S. Treasury securities, the trust fund is there when we need it.

Then what is the problem? That trust fund is not quite what we might imagine.

With each extra dollar that it collected, the Social Security Program bought interest paying Treasury securities. So instead of cash, perhaps we should picture trillions of dollars of Treasuries in that imaginary box. Or maybe we should just think of a box filled with bookkeeping entries.

The Future of the Trust Fund

By investing its surplus in U.S. government securities, the Social Security Trust Fund creates a stream of income from the interest on its bonds. While usually that interest is paid with new Treasury bonds that “stay in the box,” sometimes Social Security needs extra cash to pay its bills. Then, as they did during the past three years when Social Security needed close to $200 billion to cover a revenue/spending gap, the Treasury sells new securities.

And therein lies the problem. 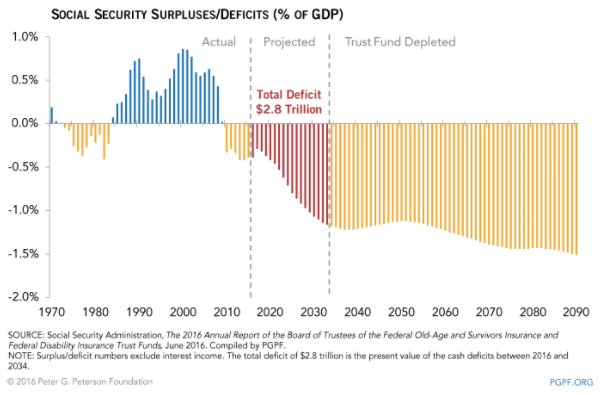 Because Social Security finances are really complicated, it is tough to recognize that the deficits have begun. With spending exceeding non-interest revenue, we are already draining a back-up trust fund with new government borrowing.

My sources and more: Hoping to find some good analysis of the 2016 Social Security Trustees Report, I discovered this excellent column from the Washington Post and this analysis from the Peter G. Peterson Foundation.

Why We Should Worry About Medicare

Why Department Stores Are Dying