For China, becoming a middle income country is about more than per capita income. It is also about rice.

More than doubling during the past eight years, per capita incomes in China have steadily increased since 2000:

With more income, Chinese demand for better rice is growing. In a McKinsey survey of 10,000 consumers in 44 cities, 25% of their sample traded up to premium rice: 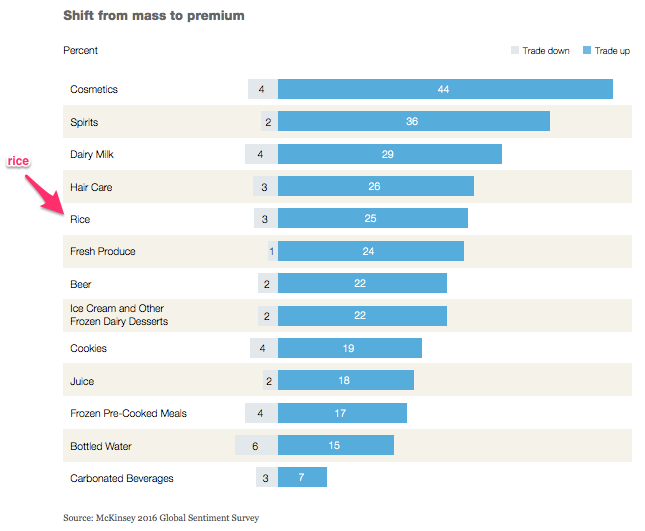 While Chinese consumers are among the world’s biggest rice eaters, Chinese-made rice cookers have had pre-1980s technology. Low quality, they tend to overheat and make inferior rice. Anyone who wanted consistently plump, tender, and pleasantly chewy rice grains looked to Japanese producers.

Now though, with incomes up for a relatively small but growing middle class, the market for a quality rice cooker has expanded. As a result, Chinese firms are making state-of-the-art induction cookers that target the more affluent as well as machines for the lower income urban population. For the first time, domestic technology has recognized the variations in altitude, humidity, voltage and rice brands that affect quality.

For a developing economy, becoming  more affluent first means more meat and then maybe a washing machine. Described through a development ladder, at each rung, spending surges and then flattens at that higher level when consumers can afford to climb to the next step.

On the following spending ladder, we could insert rice cookers just below the washing machine. We also should move China upward from the 2012 rung shown below:

My sources and more: Ideal complements, this WSJ article on rice cookers provides the specific example while the World Bank has the statistics and McKinsey’s Reports on the Chinese consumer convey the overview.

Why We Have Peach Problems