Called eye-popping by the Wall Street Journal, Ireland’s GDP growth rate for 2015 was 26.3%.

Last year, when Ireland’s 7.8% growth rate was estimated during March, the Wall Street Journal said it was “staggering.”

Looking at Ireland’s GDP history, you can see that a 7% growth rate is high: 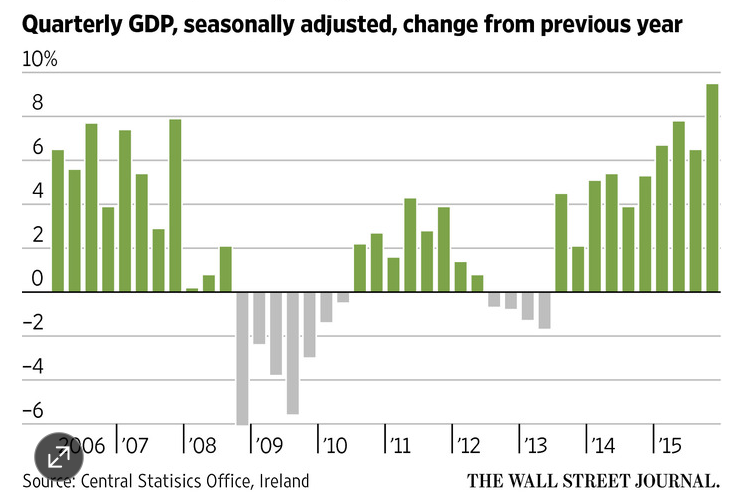 Next, by comparing a projected 2015 Irish growth rate to other developed nations, you can again see that 7% is unusual and 26.3%, extraordinary:

Because Irish taxes were so low, hundreds of U.S. firms flocked to Ireland to merge with Irish corporations. Then, based in Ireland, the business done by these newly created entities was added to the Irish GDP. As one Irish statistician explained, “What happens here is that an entire balance sheet of a company relocating to Ireland from somewhere else is included in our capital stocks or our international investment position…” Even exports that do not move through Ireland are counted in their stats.

The problem is that we wind up with a misleading statistic. Although the GDP soars, at 7.8%, Irish unemployment remains high. Correspondingly, the actually production of goods and services is disproportionately low.

So yes, when we look at GDP numbers, they seem rather precise. We can get a total for the value of goods and services produced to get the GDP for a single year and then compare two years for a growth rate.

However, GDP statistics are rarely that simple.

My sources and more: Always interesting, the BBC podcast More or Less alerted me to the Irish GDP anomaly. Then, for more detail and background,  the Irish Times, Bloomberg, WSJ, and the Economist were helpful. Please note that several sentences from Our Bottom Line appeared in a previous econlife post.

The Unintended Consequences of NIRP