When one mathematician tried to measure the British coastline, her initial result was 3960 kilometers. But then continuing to increase her scale, she wound up with 4300 kilometers, then 4800 and after that 6182.

The reason was the detail. Each closer look revealed a new zigzag or maybe an inlet that added to her total as she measured an increasingly jagged landscape.

Where are we going? To how parental leave might not be as simple as it appears from a distance.

At many U.S. universities, gender neutral family friendly policies were supposed to create more gender equity. Typically given seven years to compete for tenure, those aspiring to the top of academia attend graduate school, become assistant professors, and try to produce world-class research. Knowing that the race for tenure occurs when couples start families, certain schools extended the “qualification period” by a year for each child.

Although the extension was supposed to help women, gender equity worsened. Whereas the men with more time did their research and writing, the women did not. As a result, researchers reported a 19% increase in the probability that a man would get tenure at his first job while women’s chances decreased by 22%.

Our Bottom Line: Division of Labor

Nobel Laureate economist Gary Becker has characterized the family as a little factory that produces children using the parents’ division of labor. Recent statistics from Pew Research indicate that while the division of labor is shifting somewhat, still women feel the bigger burden.

During a typical weekend, dad relaxes more than mom. And during the week, a mom spends more time on housework and childcare than her spouse.

Below you can see how moms and dads allocate their time:

Below, it is even more evident that a working mom has little time at home for research: 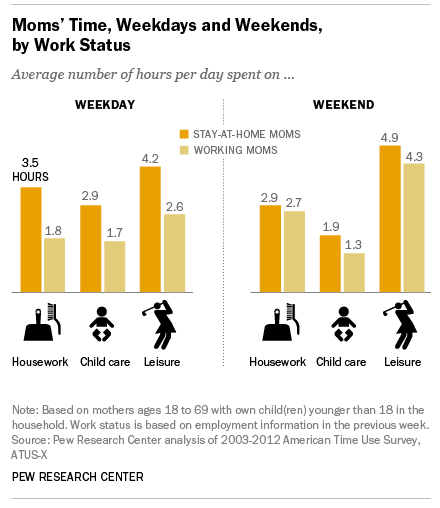 So, whether we are assessing the length of the British coastline or the impact of family friendly policies at U.S. universities, a closer look reveals some unexpected details.

My sources: Always interesting, economist Justin Wolfers wrote a NY Times op-ed on the family friendly policy that backfired. Complementing his discussion, Pew Research had their family surveys while this paper had more detail. And finally, my British coastline number came from the BBC’s More or Less, a podcast I highly recommend.

What Brexit Takes Away From U.K. Cheesemakers