What Most of Us Never Knew About Father’s Day

An instant hit, Mother’s Day was first celebrated in 1908 and proclaimed a national holiday in 1914. Fathers had to wait until 1972 for the federal calendar to include their day.

Where are we going? To the Father’s Day facts we (probably) don’t know.

The Ads That Created Father’s Day

After the state of Washington recognized Father’s Day in 1910 it became somewhat of a non-event. Never disappearing, sometimes celebrated, Father’s Day just existed until an ad campaign from the Father’s Council.

And this is where it gets interesting.

During the 1930s, a group of men’s clothing retailers organized the National Council For the Promotion of Father’s Day. They knew a dad’s day would boost men’s clothing sales. Or, as Vox explained, we can thank the necktie for Father’s Day…and also the people who sold tobacco and sporting goods and any item they could promote just before the holiday.

A 1938 Macy’s ad (below) encouraged us to make Dad our king for a day with a necktie, a pair of cufflinks and maybe a tie clip: 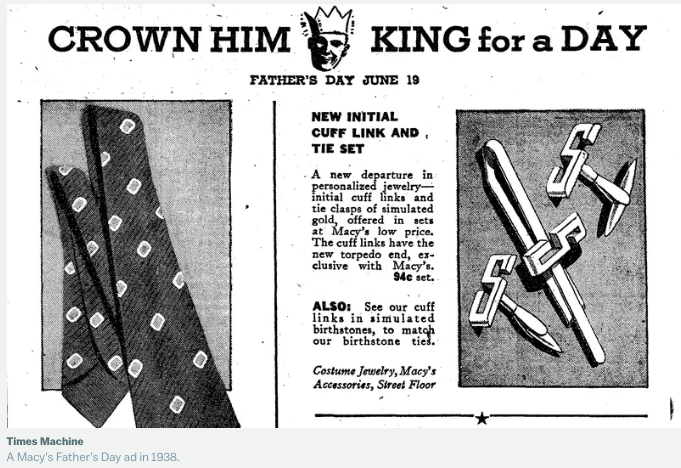 And still, almost 80 years later, Dad gets many of the same presents. 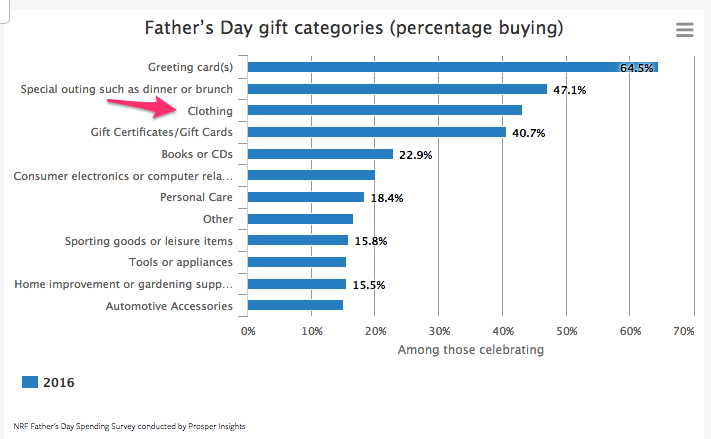 Our Bottom Line: Money and Power

In addition to the retailers’ role and a real desire to honor dad, a history of Father’s Day spending can also take us to gender inequality. Displayed by the following rhyme (Consumer Rites, p. 281), when a man controls the family purse, gift giving from a spouse reflects his power and women’s financial dependence.

The Old Man wept, and his teardrops swept

For he knew he must pay the bills.

Now though, a direct source of consumer spending, approximately 46% of the labor force is female.

My sources: Time, Vox, and Consumer Rites presented some history that ideally complemented the stats from the National Retail Federation.

Sweden's Switch to Driving on the Right