Looking around the world, the biggest cheese consumers include France, Iceland and Germany. Meanwhile, in Japan, South Korea and South Africa, a cheese lover might be hard to find. 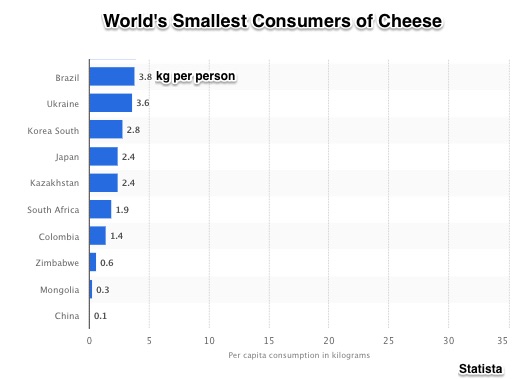 Although we are relatively big cheese eaters, still the U.S. has a cheese glut.

Where are we going? To the power of supply and demand.

Our story starts on a farm in St. John, Michigan. Observing skyrocketing milk prices in 2014, Carla and Kris Wardin expanded their cowherd from 250 to 400.

When milk production rises, so too does the amount of cheese we make. Meanwhile, cheese had become increasingly popular at home and was selling well in foreign markets. But then, the dollar strengthened, cheese exports became relatively expensive and cheese imports, cheap.

You can see where this is going. Combine more cows, more milk, more imports and declining foreign sales and it all adds up to a cheese glut. Even this year, because record milk production is projected, cheesemakers will be adding to what they already have in cold storage. (Frozen cheddar can be stored for years but not feta.)

This is where prices moved. You can see 2014 highs and then the slide.

First we have the price of cheese rising because of a surge in demand:

But then, by the end of 2014, supply goes up while demand starts to decrease. You can see a lower equilibrium price:

What to do about the glut? We might have to eat three more pounds of cheese a year.

Why We Eat Sliced Apples