A Greece Update in 4 Graphs

Because of new taxes required by the latest Greek bailout, coffee drinkers will soon have a 20% price hike.

Where are we going? To an economic update for the fourth bailout.

Just like you can judge whether the mortgage on your home is too large by comparing it to your income, you can decide if a country owes too much through a debt to GDP ratio.

Meanwhile, the Greek economy had a declining GDP during two of the past three quarters and high unemployment.

GDP growth during the past 12 months:

Unemployment during the past 12 months: 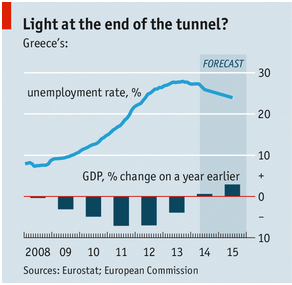 Our Bottom Line: An Austerity Debate

When you think of the debt that is due, please return to the numerator and denominator of the debt to GDP ratio.

The goal is for the debt to GDP ratio to decrease, ideally with a larger denominator. However, targeting less spending and higher taxes, the terms of the fourth bailout focus on the numerator. Some economists say the numerator focus is the reason that Greece’s GDP is declining, unemployment remains high… and coffee will be much more expensive.

But that takes us to the austerity debate, a topic for another day.

Why Safe Cracking is a Monetary Policy Tool in Libya

The Cost of a Single-Payer Healthcare Plan