Why the Minimum Wage is About More Than Money

Now $9.00, New York State’s minimum wage went up by 25 cents on January 1st. Asked about the minimum wage increase, the owner of Manhattan’s Pizzetteria Brunetti said it will cost him $700 more a month.

Whenever the minimum wage rises, the traditional focus is jobs. One group of economists says jobs and output decline while others, citing recent research, disagree. Now though, complicating the minimum wage debate, some new research has concluded there is much more to consider.

Where are we going? To the multiple ways that firms respond to minimum wage mandates.

The Cost of the Minimum Wage

Because of the new minimum wage, delivery people at Pizzetteria Brunetti no longer hang out until they get a call. Instead they’ve been assigned other responsibilities that cut their “down time.” Pizzetteria Brunetti’s new policy corresponds to the results of research at 81 Southern fast food outlets. In addition to hiring and firing decisions, a new minimum wage affects other “Channels of Adjustment.”

After the minimum wage rose from $6.28 to $6.68 to $7.15 between 2007 and 2009 in Georgia and Alabama, a group of researchers observed how a quick-service restaurant chain responded. Yes, the research focused on jobs data. But also moving far beyond, they looked at prices, training, other employees’ wage boosts–at the multiple ways that firms try to cut costs and increase revenue. Prices did go up on meals like the combo meal (sandwich, small fries, small soda). Also the firm’s wage structure “compressed” because higher paid workers received lower raises. As for hiring and firing, there was less of both because training cost $300 to $400 a person. Other results included less overtime, better inventory control and more for each worker to do. Interestingly, both performance standards and worker morale grew.

You can see below some of what store managers do to offset higher minimum wage costs. Higher numbers indicate more popular strategies:

So when we hear that the minimum wage increase has not influenced the number of jobs, we can assume that there was another Channel of Adjustment.

Our Bottom Line: No Free Lunch

Whenever you see (below) the traditional graph of the impact of a higher minimum wage that we’ve always thought (and taught) was valid, do also remember other “channels of adjustment.” 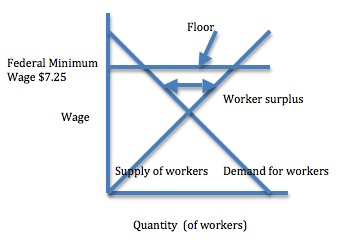