How High Can a Taxi Fare Go?

Tough to get in rain, ice or snow, NYC cabs never seem to be around when I need them. That is what makes Uber such a great story. First used in San Francisco, the idea behind Uber was to make more rides available when city licensing codes prohibited it. Since Uber says drivers with fully utilized cars gross more than $100,000 annually, their pricing model provides plenty of incentive on the supply side.

In NYC, the number of taxi cabs and their fares are city controlled through taxi medallions. As a result, it is illegal for Uber’s drivers to behave like cabs and pick up random riders on the street. But, they can circumvent the taxi regulations by using an app that has a GPS and payment mechanism. Because you contact them for the pick-up, they can glide around the rules and materialize just when you need them. I never knew, though, that they used “surge pricing.”

We have written about variable pricing before. In Chicago, Next restaurant charges more for prime time reservations as do airlines during the holiday season. With Uber, depending on demand and supply, their fares might be more or less than the local taxi cab.

On a snowy Saturday in NYC, Uber’s surge pricing model kicked in when fewer drivers were potentially available. Meanwhile, the people hoping for a ride soared. As a result, fares ratcheted up as much as 8.25 times the normal rate. That meant a mere mile could cost you $23.25 with a $93 minimum fare.

This is what riders saw on their phones before confirming an Uber order (from Quartz): 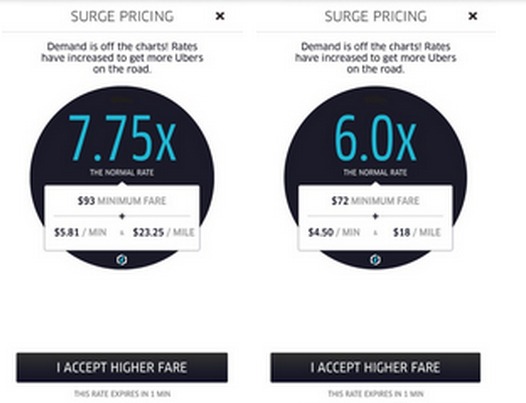 Here is where the power of the market system enters the picture. A higher price attracted more drivers to satisfy the quantify consumers were demanding.

Responding to protests, the CEO of Uber said, “We don’t just charge to make a buck though, we take a small fee of the transaction, but the vast majority goes to the driver so that we can maximize the number of drivers on the road. The point is in order to provide you with a reliable ride, prices need to go up.”

Protests about surge pricing remind me of NJ price gouging laws. Both object to unusually high prices. But, as we have commented previously, artificially imposed lower prices diminish incentive on the supply side. As a result, there are shortages because price is forced below equilibrium.

Sources and Resources: The Uber surge story was everywhere including NY Magazine, Quartz, and on their CEO’s Facebook page. To complement the surge pricing story, you might also read some Uber backgound here and more about the supply side here.

The Best Cities for an Entrepreneur