At WheresGeorge.com, you can enter the serial number of a $100 bill, your zip code and maybe even write WheresGeorge on the bill, and then send it on its way. Whenever its subsequent spenders note that serial number at WheresGeorge.com with a zip code, the bill’s travels are noted. Between March 6, 2000 and May 17, 2013, a WheresGeorge $100 bill started out in California and returned 13 years later. With one user saying that the bill looked like it had been washed a few times and another reporting a hole in the word “united,” the list for this bill covered 12,798 miles.

Taking a trip abroad is not unusual for $100 bills.

Because a $100 bill is a pretty dependable piece of paper, you can place it under your mattress today and have almost the same spending power next year. Especially now with inflation at a rock bottom 1% annual rate, the dollar is a good store of value. In addition, low interest rates mean the opportunity cost (what you sacrifice by not lending it) of keeping cash is low.

Combine a stable US currency with low interest rates and you have the incentive to use $100 bills for business transactions and to hoard $100 bills at home wherever there is political and economic turmoil.  According to an economist at the Federal Reserve, close to 2/3 of all $100 bills are held outside the US. 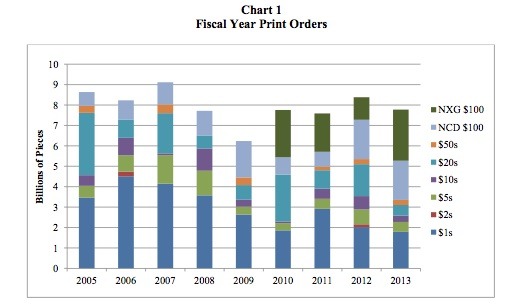 Ultimately, though, there are just 3 reasons that US $100 bills are so popular. They are a universal medium of exchange, a clear yardstick of value and a secure store of value–the definition of any valid currency.

A final thought: Based on how we define money, can newly created virtual currencies like Bitcoin achieve widespread acceptability?
Sources and Resources: For tracking bills and other facts about the money supply, the Where’sGeorge website is fascinating while Federal Reserve Reports from  2013 and 2011 this print order  convey a wealth of information. And, as always, Planet Money can add something interesting on the topic.

The Boardroom Still Has a Glass Ceiling