Irritated that church bells had been awakening them before 7 a.m., in 1879 a group of New Yorkers complained to the city Board of Health. They said the chimes violated Section 177 of the Sanitary Code and  endangered their health.

A Manhattan church increased its bell ringing from twice daily (at noon and 6 p.m.) to once an hour during the day (13 times with weekend extras) to an ongoing day and night hourly chime that included a hymn. Asked to stop, the new pastor of the church conveyed his commitment to the bells’ Christian message. Neighbors responded with, “It’s like Chinese water torture,” and “It’s so drilled into my head that, even when it’s not ringing, I hear it.” One nearby resident who kept a tally said he heard close to 1500 versions of the chiming “four-verse hymn.” The pastor did say that the night time bells were a mechanical error.

An economist might say that we have a negative externality.

When a producer “profits” from the “private” benefit of his work but creates a negative impact on unrelated third parties then we have a negative externality. On the graph you can see that equilibrium quantity is higher than where it would be if the market accounted for the extra cost. As with any supply curve, when production cost increases, supply diminishes.

You can see (below) that the social cost of the chimes decreases supply. 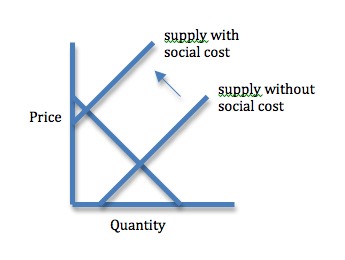 What to do?  Nobel Laureate (actually Sveriges Riksbank Prize in Economic Sciences) Elinor Ostrom (1933-2012) might have believed that the NYC Murray Hill community could formulate its own solution. In a wonderful 2009 Planet Money podcast, she explained why.

Sources and Resources: Here and here, you can read more about the current NYC chiming dispute while the WSJ provided an excellent history when it described how, in Arizona, a priest’s jail sentence for chiming was reversed by a higher court saying the original verdict violated the church’s religious freedom.

Fascinating is the only word that came to mind as I started uncovering articles on the controversies caused by church bells that dated back centuries ago. In 1772, a group of Philadelphians petitioned the state to limit the chiming of the state house bell because of “its uncommon size and unusual sound, it is extremely dangerous, and may prove fatal.” Still though, I suspect no one complained 4 years later when, as John Adams tells us, “The bells rang all day and almost all night,” in Philadelphia after the Declaration of Independence was officially proclaimed. Then, in 1917 in NJ, it all came down to technology. Claiming the source mattered, a NJ court said no to a clock-controlled church bell ringing device.

A Nutty Demand and Supply Story

How High Can a Taxi Fare Go?