5 Best Places To Be Born

In 1988, the United States was ranked #1 as the best country in which to be born. The people who did the ranking for The Economist Intelligence Unit (EIU) selected criteria that you would expect. They included GDP per capita, economic growth, literacy and life expectancy. Also though, they gave bonus plusses and minuses for random items like “the yawn factor,” diverse cuisine and “cultural poverty.”

This year Switzerland was #1 and the US, tied with Germany, was #16. However, none of the whimsical characteristics were included. Instead, health, safety and prosperity were the prime considerations. As a result, The Economist said that rather “boring” national cultures topped their list:

Discussing the results, The Economist used the perfect quote from “The Third Man,” an Orson Welles 1940s movie. “…in Italy for 30 years under the Borgias they had warfare, terror, murder, and bloodshed, but they produced Michelangelo, Leonardo da Vinci, and the Renaissance. In Switzerland they had brotherly love – they had 500 years of democracy and peace, and what did that produce? The cuckoo clock.”

Checking how Switzerland has recently (2010) fared with innovation, I found much more than clocks. According to the Organization for Economic Cooperation and Development (OECD), based on a patent to population ratio, Switzerland is among the 4 most inventive countries in the world.

Rather than looking solely at the number of patents, the OECD counts only “triadic patent families” which just means that the patents were registered in 3 countries. Logically, they point out that only people with meaningful patents would go to the trouble of getting patent protection in, for example, the US, Japan and the EU.

For absolute numbers of “triadic patent families,” I copied the numbers for the “Best to be Born In” countries from OECD tables: 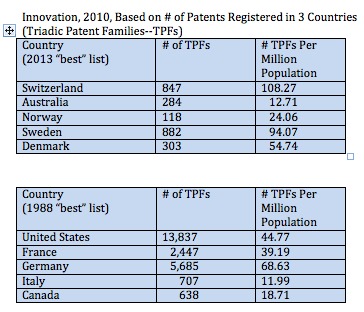 Our bottom Line: Responsible for the positive externalities that innovation creates, inventive countries have an impact within and beyond their borders. Perhaps the Economist Intelligence Unit should have included innovation among its “Best to be Born In” criteria.

Sources and Resources: I recommend The Economist’s discussion of the EIU present and past “Where to be Born Index.” Primarily just lists of statistics, still, the OECD’s patent data say a lot.

How To Be Sure That Everyone Has a Minimum Income

The Demand and Supply Sides of China's One-Child Policy