According to the American Association of Wine Economists (yes, really), as individual incomes rise to $22,000, so too does beer consumption. Then though, when wine and spirits become affordable, people move from beer to pricier liquor. The most recent stats indicate that nations with emerging markets represent two-thirds of the world’s beer consumption. (The ascent of China’s beer drinking curve in the graph below is striking.)
World Beer Consumption 1961-2007 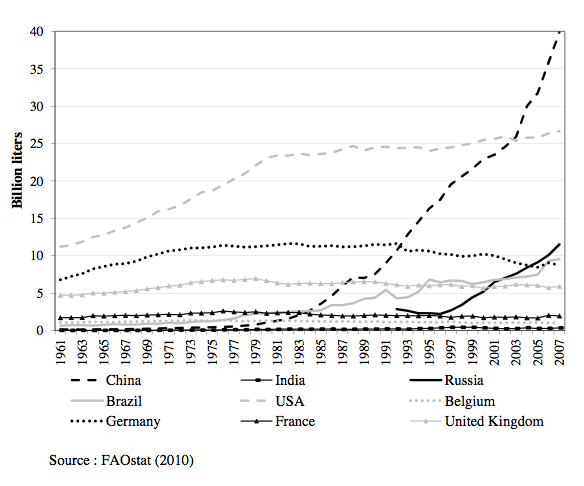 By contrast,  Goldman Sachs analysts conclude that consumers start buying durable goods like dishwashers–those that last for 3 years or longer– after their income reaches the $15,000- $20,000 level. Here is Goldman’s Ladder of Spending. You can see where dishwasher spending  fits in.

More tomorrow on how more wealth in emerging markets affects consumer spending.
Sources and resources: Quartz has a general overview of the Goldman research while you can read the academic side of beer drinking in the AAWE report. Meanwhile, econlife has also looked at coffee and ice cream in emerging markets.
Please note that a section of this post has been published previously in econlife.