The Popularity of Congress

How to perceive Congress?

As a whole, Congress is less popular than lice and brussel sprouts according to one poll. In its questionnaire, Public Policy Polling specifically asked respondents if they had a higher opinion of Congress than each of the following:

Thinking about Congress, I wondered whether we could gain some insight about our current economic plight by knowing more about the people we elected.

Growing diversity is one trend that stands out when looking at Congresses since 1945. In the 79th Congress (1945), there were no female Senators. The incoming 113th has 20. Statistics on race and ethnicity show that the 79th Congress was 99.31% white while the 112th was 82.99%. Similarly, the Congress is more religiously varied. Also, with average tenure up to approximately 10 years, lawmakers are staying longer.

Always, though, when compared to their constituencies, lawmakers have been more educated, older than the median age in the US, and wealthier. Occupationally, lawyers and business people remain dominant while many fewer legislators have careers related to agriculture.

These graphs and diagrams provide some extra details: 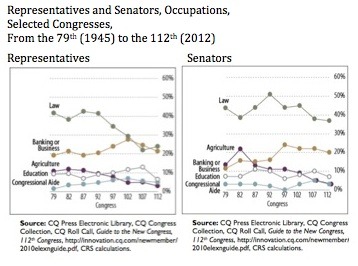 I was fascinated by the increase in tenure: 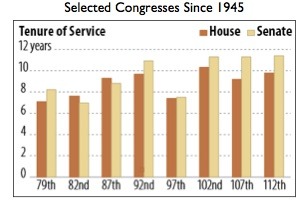 Dominated by lawyers and businesspeople, the incoming 113th Congress is typical.

Where does this leave us? I do wonder about the potential for congeniality that can lead to more compromise.

Sources and resources: My information on the 113th Congress came from this Bloomberg article while this fascinating Congressional Research Service report looked at “Trends in Member Characteristics Since 1945.” For a bit more fun, you might want to look at the Public Policy Polling on the Congress.