Infrastructure: The Internet and Canals

An internet connection and a canal could be rather similar.

Internet Connections in the Americas, 2012: 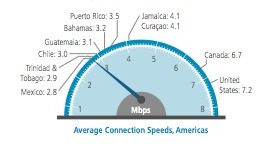 Looking beyond the Americas, South Korea leads the world with the highest proportion of its population having fast internet service (more below).

During the nineteenth century, a transportation “revolution” enabled a national market and regional specialization to flourish. It permitted us to enjoy David Ricardo’s comparative advantage with producers growing and manufacturing optimally. It fueled economic growth.

Are the fastest and most widespread internet connections also fueling economic growth–or is it the reverse?

Sources and Resources: This Quartz article has a brief summary of this Akamai report,”State of the Internet” that was the source of the above infographic and information on connectivity. For more on worldwide internet facts, you might want to look at this broadband report from the OECD and for David Ricardo and comparative advantage, econlib.org is always useful.

The Debt Ceiling: A "Choose Your Own Adventure" Story