How much do you think a package affects your buying decisions?

In 2009, Pepsi changed Tropicana’s packaging. It was disastrous. Within 2 months, sales plunged 20% and they quickly switched back to their traditional orange with a straw.

Some consumers said the new design looked too generic. Others thought the new package was ugly and made it difficult to distinguish among Tropicana’s different juices and from other brands. In letters and emails, juice drinkers expressed anger and called the change “stupid.” 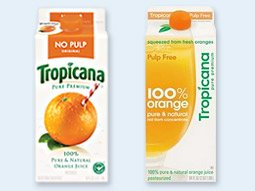 For beauty and personal care products, consumers said it was not the aesthetics that mattered. Instead, according to surveys taken after the Great Recession began, they cared most about getting that last drop out of a jar, a tube, or a bottle.

I thought the following info about how much we leave behind in containers was fascinating. (From WSJ.com)

The result? We are seeing “airless pumps” that empty 98% of the bottle.  The Container Store sells a tube squeezer (Squeeze Ease). Luxury beauty cream makers are including a spatula for scraping residue.

Our bottom line? Thinking of the 4 basic competitive market structures–perfect competition, monopolistic competition, oligopoly and monopoly–packaging counts when firms need to distinguish their products. That means packaging will matter most for businesses that compete in monopolistically competitive markets (that have many relatively small firms like supermarkets and dress stores) and oligopolistic markets (that have a few large firms like soda and cereal makers).

Sources and Resources: The source of many of my facts, this WSJ article, “Why We Crave the Last Drop,” is a good read but it is gated. Also interesting, this academic paper looked at packaging and this NY Times column discussed the Tropicana fiasco.

The Panama Canal and an Invisible Line