But looking at this graph from The Economist, you can see that the lipstick effect does not consistently correlate to good and bad times. 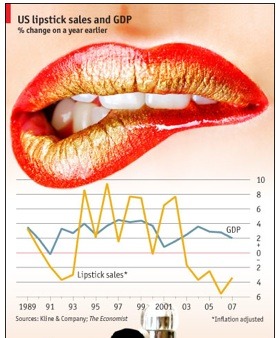 Still though, Mr. Lauder says the effect is really about less expensive luxuries that buoy people during hard times. For recession year 2008, with sales skyrocketing, perhaps nail polish is the new lipstick.

In addition to lipstick and nail polish, for the following 2008 recession indicators, I don’t have sufficient data, but don’t they make sense?

Like a rubber band, our spending can be somewhat elastic. During prosperity, for certain goods and services, our spending stretches a lot. Then though, for those same items, when recession hits, we buy much less. Called the income elasticity of demand, when we have noticeable changes in the quantity that we demand because our income drops, our buying behavior creates a recession indicator.