If people over 60 are your biggest spenders, then how do retailers respond? For starters, they slow down the escalators.

In Japan, with people over 60 doing 44 percent of the spending, and with those over 65, 23.3% of the entire population, merchants are becoming more elder-friendly. One major Tokyo-based supermarket has slowed its escalators to two-thirds their normal speed and made their shopping carts lighter. Seeing elders buy more diapers than young mothers, retailers also expect increasing demand for small size food packages and lunch delivery trucks. And several large chains have begun to offer discounts to people over 65 on the days that pension checks arrive.

Our bottom line: In countries like Japan with aging populations, the public and private sectors will have to adjust. As fiscal policy–spending, taxing, borrowing–increasingly targets the challenge of supporting more retirees, so too will businesses respond to a shifting demographic.

Sources and Resources: All of my facts about Japanese retailers are from this Bloomberg article while the population pyramids that follow are from the Economist’s “Graphic Detail” daily charts, a great source for fascinating information. In addition, here, in a series of 2010 Special Report articles, the Economist discusses the challenges Japan faces as its demography shifts. Finally, I thought it might be helpful to see the OECD (Organization for Economic Cooperation and development) “Elderly Population” graph to compare worldwide aging. You can see India at one end and Japan at the other. 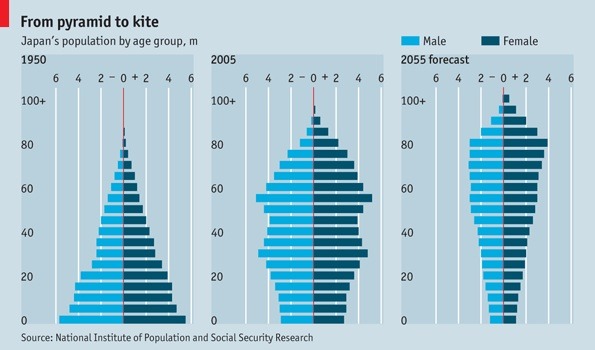