Chloe and Gus, my daughter’s miniature Pomeranians, consume organic dog food and use wee-wee pads, they visit the vet, the groomer, and enjoy their treats and toys. Because of Chloe and Gus, my cats, and the dogs in 1 out of every 4 households in the US, we have a growing pet industry.

I started listing the discretionary spending that supports Chloe and Gus after reading about the Euromonitor Dog Index for 53 countries. Here are some facts that connect pooch spending to prosperity:

Averaging one dog in every 4 households, the US has the world’s largest pooch population. But Norway does the most per capita pup spending at $639 while Switzerland and Australia ranked 2 and 3.

In the developing world, Brazil, with a more affluent urban population, has the most small dogs per capita. But the biggest proportional increase in dog ownership was led by India, and then the Philippines, Venezuela, Russia, and Argentina. Still though, while dog ownership in India rose 58% during the past 5 years, they have only 4 dogs per thousand people. By contrast, dog ownership in the Middle-East is much less popular. In Saudi Arabia and Egypt, with only 2 dogs for every thousand people, dog ownership is rare and typically relates to big dogs and security.

Finally, the financial woes in the euro-zone appear to have affected dog ownership. France, with a sagging economy and Greece, on the brink of economic cataclysm, have fewer dogs than 5 years ago.

Our bottom line: Chloe and Gus are much more than family dogs. Dog ownership can be an indicator of a country’s economic growth and decline.

Sources and Resources: My facts on dogs are primarily from the Atlantic article and from a marketplace.org report. You might also enjoy this Bloomberg article on a NJ legislative proposal for mandating doggy seat belts and Governor Christie’s response. Finally, these econlife links look at aspirational purchases in the developing world.

This chart is from the Atlantic article cited above. 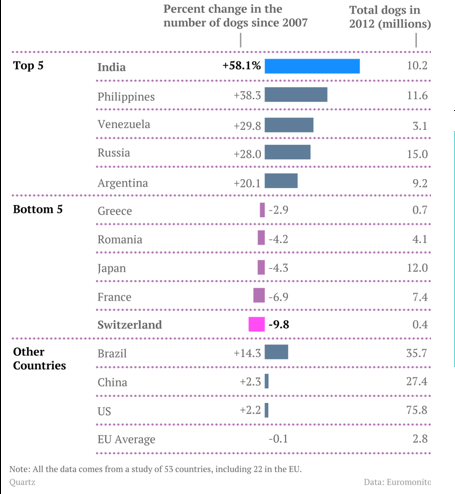 Please note that this post’s conclusion was edited after it appeared.