Today, some thoughts about pantsuits and power.

One scholarly analysis of Hillary Clinton’s pantsuits concluded that they displayed her toughness.

In a Harper’s Bazaar interview, Nancy Pelosi is asked, “How many pantsuits do you have?” Her answer: “I don’t have any idea. Endless.”

According to Business Insider, because Angela Merkel wears the same Bettina Schoenbach pantsuit style everyday in a different color, she might have inspired the recent Greek riots. The reason? Her attire conveys rigidity. (After a state dinner, Ms. Merke gave Hillary Clinton a framed newpaper picture of the 2 of them from the waist down captioned, “Which one is Merkel, which one is Clinton?”)

One analysis of female news anchor attire points out, though, that the pantsuit mandate is fading. Seven years ago, Fox anchors started wearing dresses, more make-up and higher heeled shoes. One analyst suggested that as the status of female anchors ascended, they felt sufficiently powerful to dress individually. Still though, an Indiana University study revealed that male viewers forgot the news content (called a cognitive fog!) when delivered by “boldly dressed women.”

Our bottom line? Female participation rates in the US labor force (see below) have skyrocketed during the past 50 years. And yet still, to compete in the workplace, for women more than men, clothing can affect their success.

Sources and Resources: The articles discussing the connection between female empowerment and attire were fascinating. I read about Angela Merkel in Business Insider and WSJ.com,  Hillary Clinton, in this scholarly paper, Nancy Pelosi in Harper’s Bazaar, and got further insight from msmagazine. For the history of what female news anchors have worn, this Washington Post article was excellent. 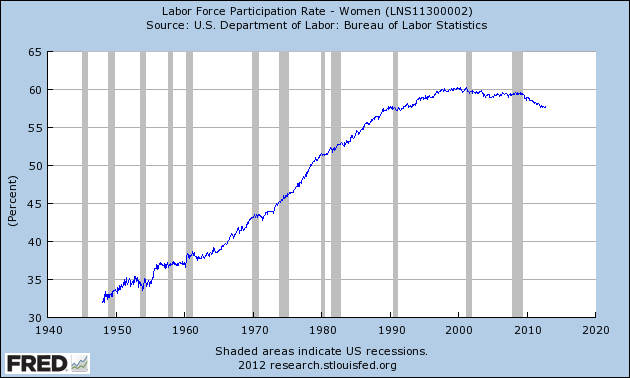