One of the first calls a new Nobel Prize winner might get is from Adam Smith, editor of NobelPrize.org. As you might expect, hearing his name, people initially wonder if the call is for real. Usually Mr. Smith does a quick interview and sometimes, if the winner missed the congratulatory phone call, he shares the good news.

This year, Adam Smith called other 2012 Nobel recipients but not the people who got the econ prize. 89 years old, Lloyd Shapley, professor emeritus, University of California, Los Angeles was not available to talk. His co-prize winner, Alvin E. Roth, a Harvard professor (who will soon be at Stanford), told a bit about himself and his work to a different Nobel caller. (I am disappointed that I cannot say Adam Smith called the new econ laureates.)

In markets that do not involve money, it is tough to create optimal matches. Working separately, these scholars created the math that made it possible. As Dr. Roth explains in his Nobel interview,  he developed a practical application of the concept that Lloyd Shapley and David Gale created. Because of Shapley and Roth, more donors and recipients are paired for kidneys, more people can get assigned the roommates they each want and more NYC children can go to schools that prefer them. You can see the complexities in the diagram below from a Nobel website.

Technically the Nobel Prize in economics is really the Sveriges Riksbank Prize in Economic Sciences in Memory of Alfred Nobel because it was created long after Alfred Nobel died and therefore was not in his will. Interestingly, with Lloyd Shapley a mathematician, this year again, one of the economics prizes did not go to an economist. In 2002 it want to Daniel Kahneman, a psychologist and in 2009 to Elinor Ostrom, a political scientist.

A final fact: I was delighted that in his interview, Dr, Roth said, “Yes, economics is about real life, so I’m very interested in that.”

Sources and Resources: I suggest listening firsthand to Dr. Roth’s interview so that you can “meet him” and hear firsthand what he does. To learn more about how Dr. Shapley and his associate, David Gale, established the groundwork for Dr. Roth, their brief and easy to understand 1962 math article about “pairwise” matching in marriage markets is fascinating. For the detailed explanation of the three scholars’ accomplishments, Nobel has an excellent description that also has more about the diagram I’ve included. Finally, I suggest looking at Dr. Roth’s blog. He has a great smiling picture of him and his wife with the caption, “An inadvertent ad for Starbucks.” 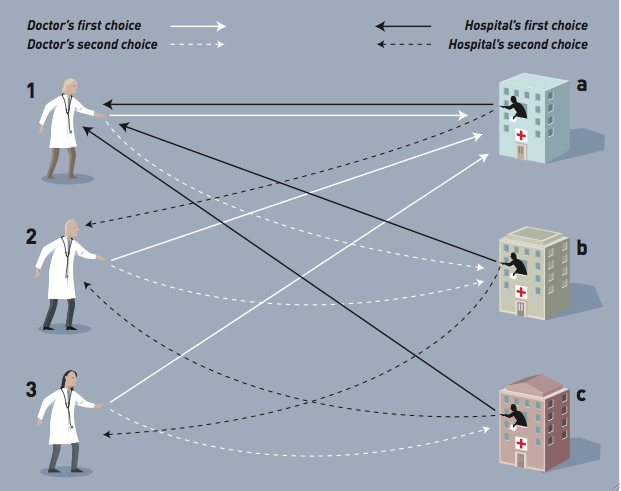 And, here, also from Nobel.org, are pictures of Dr. Roth (above) and Dr. Shapley. 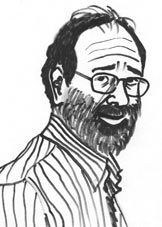 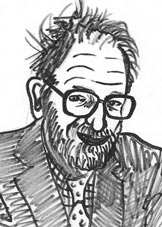 A New View of the Fiscal Cliff and Greece