Should you deposit your money at your local ice cream parlor?

Yes, according to a Pennsylvania businessman who has opened a bank in his ice cream shop. But he says his business idea is not really a bank. He does take deposits and offers loans, but you get your interest in waffles, coffee or ice cream gift cards.

So, if someone creates a “deposit” by giving Ethan, the owner, some money and gets a coffee chip cone as interest, is it a bank or an ice cream parlor? The ice cream shop is called Oh Yeah! and the bank in the shop is the Whalebone Cafe Bank. Encouraging people to make a deposit, the sign on the door says, “Skip the Banks.”

The FDIC is concerned that an increasing number of people are “skipping the banks.” Called the unbanked and underbanked, close to 1/4 of all households, with 68 million adult members, do not have a bank account or use one minimally. Summarized in a Forbes article, a 2012 FDIC report said that families without traditional banking services tend to save less, pay more elsewhere for financial services and have difficulty securing credit. (You can see below the reasons that households are unbanked and underbanked.)

I wonder whether the time has come for new consumer banking products.

During the 1970s, when interest rates soared, savers became dissatisfied because their accounts were required by law to provide no more than 4.5%. The market responded with the first money-market fund. Called the Reserve Primary Fund, it had a much higher return than the insured saving accounts with interest rate ceilings based on 1930s legislation. Soon, the Congress and the banking community responded with banks getting more freedom to compete and retain their clientele.

Sources and Resources: This report from the FDIC details the underbanked and unbanked populations while this Forbes article summarizes some of its key ideas. For the facts on the Pittsburgh, PA ice cream shop that offers banking services, this WSJ article (gated) and this Pittsburgh Post Gazette article (ungated) convey the details. Finally, describing the history and current problems of the Reserve Primary Fund, this WSJ article is excellent. You might also want to look back at yesterday’s EconLife post asking, “What about the savers?” 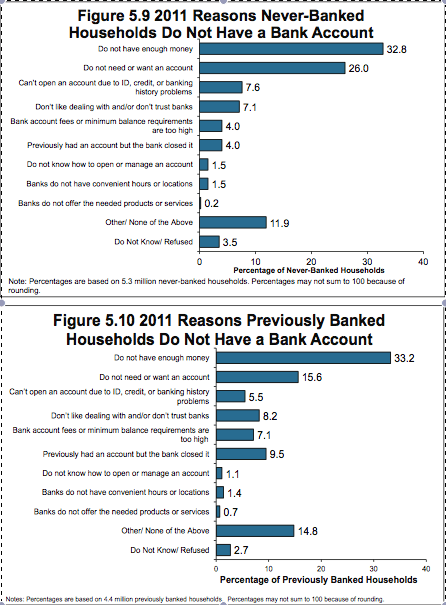 QE3 and the Baby Boomers